…and Folk
…and Country
…and R&B
…and a fair sprinkling of Beatles too!

The first week of a new year brings with it many different type of “first days back”: First days back to work, to school, to eating a normal diet. Yet none are quite so pleasurable as the first AllStyles Music Night following the two week festive break!

And what a great night it was, with thirty-six of us gathered in the back room of The Feathers, fourteen of whom entertained with up to three songs each. Just over three dozen songs in all, and with the sort of diversity that led to the club having “AllStyles” in its title. 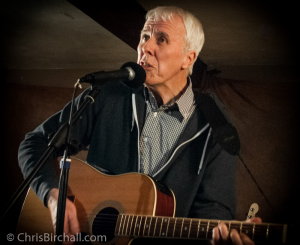 Lynda broke the ice with a set that took us to North America under the “Wild Montana Skies” and her partner in crime, Tom, took us on a musical journey some 2,000 miles east to “The Blue Ridge Mountains of Virginia”.

Next up was one of our newer members, Mike Whittaker from Llandudno.

His set included an original number that came about after his musician friend Colin Campbell, also from Llandudno, suggested that the phrase “Love is Everything it’s Cracked up to be” would make a good song title – and I must say Mike made a cracking job of both writing and performing it! 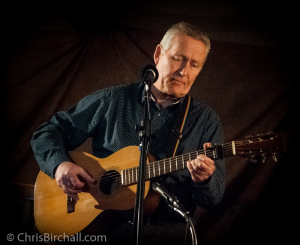 The very same Colin then stepped up to do his own set which featured Neil Young’s “Sugar Mountain”, and “Every Body Knows” off Leonard Cohen’s 1988 “I’m Your Man” album.

Joe came over all nostalgic about his home town with The Beatles’ “Yes It Is”.  He also did “Bus Stop”  (The Hollies) and a lovely version of Sandy Denny’s “Who Knows Where the Time Goes”. 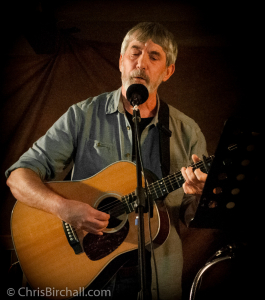 As it turned out, songs by ‘The Fab Four” went on to feature in several of the evening’s performances. Colin Masterson did a fine version of “She Loves You” on his electric uke.

My own set included The Beatles song “Eleanor Rigby“, and “Something so Right” by Paul Simon.

Peter Leslie also covered both The Beatles and Paul Simon, singing “There Are Places I Remember” and “The Sound of Silence“. But the co-incidence didn’t end there, because Peter had turned up wearing the very same Beatles (Places I Remember) Tee Shirt that I was wearing. Haha! if we were women, we’d have been glaring daggers at each other all night! 🙂 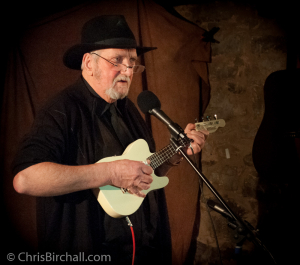 Every time Tim Eastwood arrives at the club, I eye up his gig bag and try to to guess which of his many instruments it contains. This time it was a bass guitar. There can’t be many songs you can solo on with an electric bass, but Merle Travis’s “Sixteen Tons” is well suited to the instrument and Tim sang and played it to great effect.  During the evening Tim also accompanied Tom and Richard on bass, and in the second half they returned the favour and accompanied Tim as he played a tune on his Border Pipes. 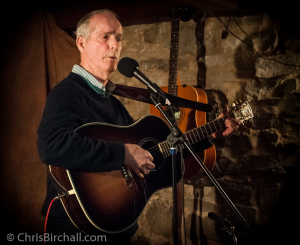 At that point we realised that another not-so-lucky person, Geoff Hollis, had been left out of the first half altogether!  Whoops!

In my defence, M’Lud, my mind was still frazzled after smoking all but two of the Christmas Sprouts, and was distracted by the fact that the Sound Desk had developed a crackle on two of it’s microphone channels!

Anyway Geoff is bigger than me, so we let him open the second half with his full quota of three songs. And they were well worth waiting for:  Ralph McTell’s “Red Sky” and “In the Dreamtime” followed by “Wouldn’t Have It Any Other Way” by prolific songwriter Kieran Halpin who, incidentally, will being be doing a Showcase for us at the club in the summer.

Hopefully I’ll be wide awake and ‘with it’ next week, and that the sound desk will serviced and fully functional for what promises to be another great Singers’ Night which will also feature a Showcase Spot by the lovely songstress Cath Bryan.

See you all then…

We’re back this Thursday! Baby it’s Cold Outside