First get-together of the New Year 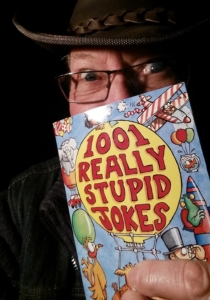 It was the coldest Thursday of the year… 🙂 yet fifteen musicians turned out to perform in the cosy function room at The Feathers. And with almost double that number in the room, the atmosphere was warm and welcoming, the music was great, and the jokes were…

Well… let’s put it like this, it was a choice between the ones collected from Christmas Crackers or those in the book 1001 Really Stupid Jokes that Glyn had kindly donated.  I think you get the picture!

According to Bob Neale it was the “Eve of Destruction” but then he switched from Barry McGuire to Donovan for the ‘Ballad Of A Crystal Man’.

The aforementioned Glyn Hudson was also in a Donovan kind of mood with “Yellow is the Colour”. And how good it is to see her reaping the benefit of the guitar lessons she’s been having from Skeet.

Richard Davies sang about being “500 Miles Away From Home” (I’m sure Rhyl’s not quite that far Richard!), although Joe Lyon did remind us that it’s a “Long and Winding Road”. Tom Degney drove us all the way to the “Blue Ridge Mountains of Virginia”, whilst Lynda sang about how it was “Good to be Back Home”.

Jack Eagle took a ride with Joni Mitchell in a “Big Yellow Taxi”, the journey involving a slight diversion with a verse or two of his own lyrics. Penni, on the other hand, had “One More Coffee for the Road” with Bob Dylan, before driving off in the “Dirty Rain”.

Enid also flirted with Dylan, singing a Welsh language interpretation of “Make You Feel My Love”, followed by Annie Lennox’s “Universal Child”, both to the accompaniment of Neil’s impeccable guitar style.

Next up were the Eastwoods with a set that included Richard’s fine baritone rendition of “Can’t Stop Wanting You” contrasted by Wendy’s sweet honeyed voice with the Edwina Hayes song, “Nobody’s Coming Around”.

Having heard from him earlier in the evening, when he sang “I’m Cutting Free” by Winter Wilson, and “Just Dreaming”, a song of his own, written back in 1974, Peter Leslie took us up to the close, Beatles style, with “In My Life” followed by an encore in the form of another home-grown composition entitled “Fate”.

A lovely end to a lovely night.
Same again next week…

Having wrangled in the past with attempting to record some of the performances into a laptop, this week we were able to try out a new piece of kit in the form of a Zoom Q2n Recorder. Still getting to grips with it and I didn’t manage to get everybody I’m afraid, but the early results are promising…

Let us know what you think in the comments section below.