First of May, Pinching Day 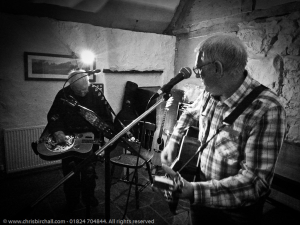 Well there were no white rabbits on the menu at Ye Olde Cross Keys last night but there was plenty of musical frolicking from an uncharacteristically small but enthusiastic gathering up in the AllStyles annex.

Compared to last week, when they were hanging from the rafters and two abreast on the stairs for the Gary Edward Jones Spotlight gig, we were way down on numbers.  Maybe everyone was preparing for the Bank Holiday weekend!  Who knows! Nevertheless It was an absolutely fabulous evening with everyone managing to fit in four or five numbers including quite a few impromptu collaborations.

Featuring prominently in those collaborations was the club’s “new toy” …a cajón drum box acquired for the club by Stephen.  Several members had a go at being Ringo, including the club’s poet laminate, Afonwen Andy, who played it in strict iambic pentameter! 🙂

Songs came from Richard, Tom and Linda, Joe, Maureen, Chris, Enid, and Stephen.  And it was good to hear Neil’s articulate finger-picking again as he accompanied Joe en-route to the House of the Rising Sun.

It was great to see Bryn Dowel at the club, and although he came unarmed, a guitar was thrust into his hands and he was persuaded to treat us to several great country numbers with backing on mandolin and dobro from Tom Degney.

It just goes to show, you don’t always have to have a packed house to enjoy a wonderful evening of music, fun and laughter.