As I write this, the Saturday “Top Of Town” event is about to start. Billed as the highlight to Ruthin’s Festival of Music – Gwyl Rhuthun, it brings twelve hours of music on the outdoor stages and later at several pub venues.

This year our own contribution to Ruthin Festival came in the form of the successful Guitar Workshop on Tuesday (see below) and our Thursday evening of Folk, Country and Blues music by club members and visitors.

It was good to see yet another well attended evening and no fewer than fourteen performers taking part.

Bob Neale got the music underway with some traditional Irish folk followed by Tim singing the 1938 blues number by Mississippi John Hurt – Let the Mermaids Flirt with me. 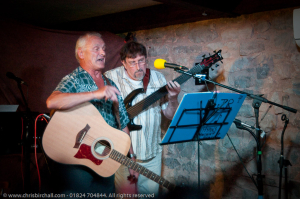 John and Ros gave us Fever and American Pie before calling for Mr Sandman. Chris went down Dylan’s Positively 4th Street before sailing off Into the Mystic, and Jim treated us to a jolly jaunt on the fiddle.

Singing acappella, Glyn managed to get the whole room involved in a “community sing-around” and Penni took us up to the break with a lovely Welsh song written by Gwyneth Glyn called Adra (which means Home)  followed by Gershwin’s Summertime.

Taking the stage with Harry and John Bass, Richard opened the second half of the evening with Memphis in the Meantime and Sea of Heartache.  Harry’s set included You’ll Never Leave Harlem Alive and Don’t Think Twice. 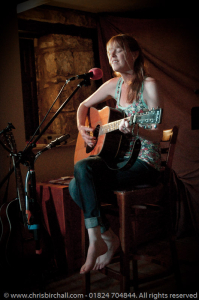 Tim came back on stage having swapped his guitar for his set of border pipes. The tune was catchy and every table in the room became an accompanying drum kit!

Then it was Cath’s turn. Singing barefoot, Sandy Shaw style, she gave us songs from The Bee Gees and Joni Mitchell followed by Imelda May’s Big Bad Handsome Man.

It was nice to welcome Wrexham Folk Club member Peter Leslie to the club this week. His Fire and Rain (James Taylor) and Simon & Garfunkel’s America went down really well with the audience as did his John Martin song May You Never.¹ Hopefully we’ll hear more from Peter at future meetings.

The finale spot this week fell to Joe who had brought with him a few pals from his Liverpool school days. They were spending a couple of days in Ruthin for a reunion get-together and hadn’t heard Joe perform since their High School Christmas shows – so no pressure then!  Of course, he didn’t disappoint. His two sets included John Lennon’s Woman, with backing vocals by John and Ros, House of the Rising Sun and Blue Songs on a Red Guitar. He was also joined on stage for some of his songs by the omnipresent John Bass. 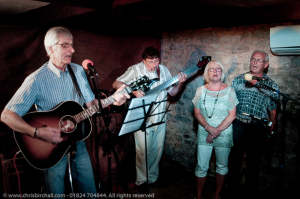 And for a great finish to a superb evenings entertainment, he sang the old Joe Brown favourite I’ll See You in my Dreams.

See you all down at The Feathers again next Thursday!

¹ Correction: Peter’s song was May You Never, not Love is a Lesson (see comments)