Well… what a fabulous evening of music that turned out to be.

After an opening round of floor spots from eight of the Ruthin AllStyles regulars, Gary Edward Jones began his first set with three of his newer songs, “Animals”, “Sunrise” and “Help me Out Lord”.

Originally booked to perform solo, we were delighted to discover he had assembled a band of four other talented musicians to accompany him: his wife Elizabeth on mandolin and backing vocals; Ben ‘fingers’ Gladwin on keyboard, John Crump on bass, and Dan Logan in the percussion department. The overall sound was polished, balanced and professional, and an absolute delight to listen to.

As the set continued, we were taken on a sublime journey that included songs off Gary’s critically acclaimed 2014 album, The Cabinet Maker, and some that will feature on his next album – a vinyl due to be released on the Jacaranda Records label.

Something About Simon
In addition to his own beautifully crafted songs, Gary’s performance was laced with a fine selection of covers of the songs of Paul Simon. (Click ► to hear Gary sing America)

Having spent years shunning any notion of capitalising upon his similarities to Paul Simon, which are both visual and vocal, Gary finally capitulated. But not content to simply cover these in an arbitrary fashion, Gary spent more than two years studying Paul Simon’s finger-picking style, and perfecting the subtle nuances of the American folk singer’s voice, to perfect an authentic sound. 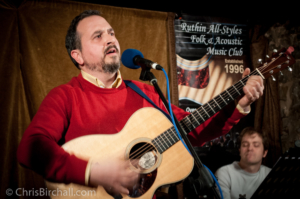 All the hard work has finally paid off, with Gary having recently been signed-up to undertake an 80 venue tour of his multi-media show “Something About Simon”.

And I’m certain the tour will be a resounding success because, as we just witnessed during this concert, the only other person who sounds more like Paul Simon is Paul Simon himself.

The mid evening break was followed by a two song set from one of Ruthin’s newest young talents, Fuchsia Jones (below), who sang the Lorde song “Liability” and Laura Marling’s “Rambling Man”. 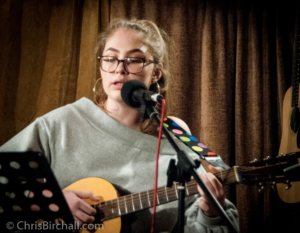 Then, as the second 45 minute set by Gary Edward Jones progressed, Fuchsia returned to the stage to take on the lead vocal on “Oceans”, a beautiful and poignant song that Gary wrote about the plight of the refugee children who lost their lives whilst taking flight from war-torn lands.

As this set came to a close there were enthusiastic shouts of ‘more’ from the capacity audience. Gary obliged with the Paul Simon classic “April Come She May”, and then sent us all home with a reggae earworm, in the form of his catchy upbeat song, “Who’s Gonna Love You Now”. (Click ► to listen)