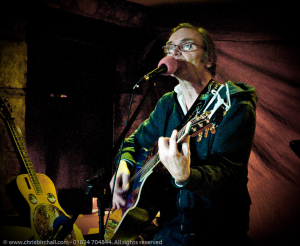 Nine Jack Rabbits and five Easter Bunnies turned up to entertain at The Feathers in the run-up to the start of the Easter Weekend.

We really didn’t know what to expect and imagined people might give it a miss as they prepared for a weekend of family visits and Easter Egg Hunts. But not at all. There was a really healthy turn-out in terms of audience members too, with several new faces in the assembled throng.

Down the corridor, the pub itself was also very busy, reminding us that we really should go ahead with getting an acoustic screen to curtail the sounds of revelry rather than pump up the volume ourselves!

Joe opened up the proceedings with a fine mix of Beatles and Joe Brown.  Rockin’ Robin busked in style and Richard’s musical journey took us “500 miles” and more besides. Lynda declared she was “Ready for the Times to Get Better” before she and Tom took us on an “Easter Parade” …with not a drop of rain in sight! 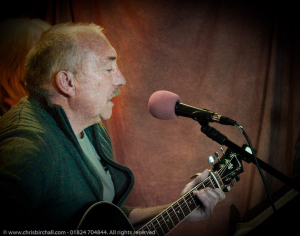 It was good to see Phil back performing again. Playing the guitar beautifully, he sang “Smile Even Though Your Heart is Aching”.

Then it was George’s turn. It was his first appearance since we moved to The Feathers and he sang about how it had been “A Hard Day’s Night” but then reassured us with “That’s Alright Mama” in his own rock ‘n roll style.

Enid sang an eclectic mix of Clapton, Dylan and The Monkees – all  in her own soft and gentle style, with that pure voice that goes so well with Neil’s impeccable guitar accompaniment. 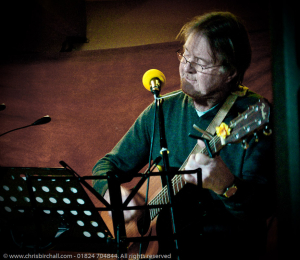 First time visitor Roland stepped up to the mic with two of his own songs about family life and another, rather timely song, venting his feelings toward all politicians. left right and centre! Roland hails from Connah’s Quay and is an occasional visitor to the Cross Keys club in Llanfynydd. Let’s hope we see more of him at Ruthin too!

The finale spot fell to Penni. Her set included songs from Willy Nelson and Willy Russell, and she had the audience in stitches with Tim Firth’s Same Thing Twice.

Have a fab Easter everybody …see you all next week!