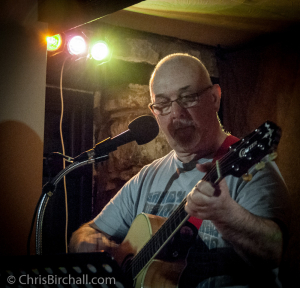 We didn’t know what to expect…

Would anybody turn up? It was, after all, the night before Good Friday and maybe everyone would be heading off for a long weekend away. Or if not, would they stay in to watch the Wales /Northern Ireland Euro 2016 clash on the tele?

Would I end up having to eat the Easter Egg raffle prize and all the choccies Jayne had bought to put out on the tables?

When Joe arrived to help set the room out, I surmised that maybe we’d have to muster a dozen songs each to serenade Jayne all evening. And drink lots of Guinness.

Well as it turned out, we ended up with one of the busiest and best Singer’s Nights of the year, with thirty four through the door, twenty one of whom were performers.

There were some new faces in the audience too, including two ladies all the way from Holland who’d been holidaying with John and Ros Ryder.

As well as the usual suspects, it was good to see Matt on the business end of the microphone, accompanying Alex on mandolin as she sang “Losing My Religion”. 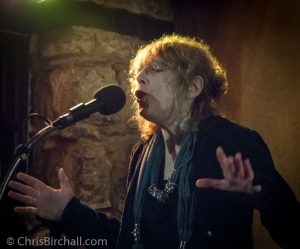 Annie and Bob made a welcome return visit following the Showcase spot they did for us last year, as did Ian Buchanan who performed as part of The Conwy Mountain Bluegrass Band’s showcase spot last June. Annie gave us an expressive and animated “Diamonds and Rust” (Joan Baez) and one of Bob’s compositions, “Chains”.

Ian contributed a couple of county songs on slide guitar before being joined by Tom for somewhat of a unique sounding ‘duelling dobros’ instrumental. 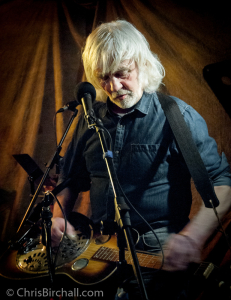 With accompaniment by Neil on guitar, Enid translated Bob Dylan’s “Make You Feel My Love” into Welsh and sang it beautifully. Then in similar vein, Colin Campbell sang a Welsh version of Clapton’s “Wonderful Tonight”.

Peter Leslie sang a beautiful song entitled “Fate”, that he’d written about people being caught up in a terror attack, the poignancy of which really struck home following this week’s horrendous atrocities in Brussels.

Then Lynda lightened the mood with a seasonal sing-along rendition of “Easter Bonnet”.

We also had songs from Robin, Joe, Glyn, Penni and John Ryder on what had turned out to be a top class evening of diverse and excellent live music that concluded with a fabulous finale from the Tom, Dick and Harry band, including John Bass of course. Their set ended with Richard on vocals for the Mentor Williams song “Drift Away”.

And so it was time for us all to drift away into a weekend of getting lost in the rock and roll lifestyle of consuming mountains of over-packaged and over-priced chocolate.

Next week we have Phil Bates and it’s a 7.30pm start so ticket holders should arrive early to get the best seats. The evening is completely SOLD OUT, so if you haven’t paid for (or reserved) your ticket there are no seats left I’m afraid, as we are right up against the maximum numbers for the room (fire regulations etc.)

Red, Green and the Blues Phil Bates – SOLD OUT