What began as something of an experiment, our Guitar Workshop turned out to be a great success with a steady flow of enthusiastic guitarists turning up during the evening.

It was nice to see some of our club members but equally, the many new faces who hopefully might look in on some of our regular Thursday Night meetings now that they have found us.

The three professional tutors, Ronnie Parry, Skeet Williams and Gareth Evans each began with a short presentation explaining their musical backgrounds and how they got into tutoring.  After a demonstration of their own particular styles of playing and a question and answer session, the attendees split into smaller groups for practical “hands on” tuition.

It was fascinating to see the three different approaches and there was plenty to learn, to the benefit of beginners and the more seasoned players.

Another highlight of the evening was a talk by guitar maker Harry Millar who has workshops in Treuddyn near Mold.  Harry imparted a mountain of useful information about getting the best out of one’s guitar. He then set up a little “workshop area” where he was kept busy throughout the evening examining and adjusting many of the instruments that had been brought along.

We are grateful and indebted to the four experts who gave their help and advice freely.  Do look them up by following the links below.

Thanks too, to Ruthin Festival Committee and The management of The Feathers Inn for helping to make this event possible. 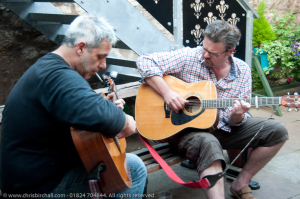 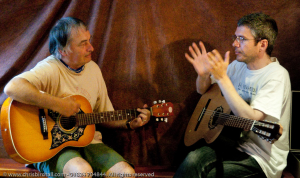