It would however, be true to say we did have the blues at The Feathers, but in the nicest possible way …and some country, and folk, some Beatles and all that jazz!

To say we were thin on the ground would be wrong however, for although numbers were down compared with the last five weeks, we still had thirteen performers and the overall attendance would have been considered a really good night at our previous venue.  Because the room is bigger here, we really need to get our bums onto the seats nearer the front to create a more intimate atmosphere regardless of the numbers.  It’s so much better for the performers if we can see the whites of their eyes! 🙂

There was one surprise performer in the shape of Mike Kendrick.  When I say “a surprise” it turns out it was as much of a surprise to Mike as it was to the rest of us!  Mike is in a band who were due to play at The Feathers on Saturday and he’d just popped in on Thursday to check about the timings etc. When he heard the music filtering through from our club night, he joined us for the evening, borrowing Richard’s guitar to give us a couple of numbers.

Best of all, he lives within walking distance. And we all enjoyed your performances Mike, hopefully we will see you again soon.

And to add to the coincidence, Jayne and I were at the Rhyl Acoustic Club on Friday to watch Paul Reaney’s excellent and very entertaining guest spot. It turns out this Wirral lad is one of Mike’s fellow band members.  It’s a small world!

See you all next week!

Rag Mama Rag are doing a guest night at the club on March 12th. There will still be floor spots for members too – so bring your instruments as usual. Tickets are £6.50 on line – or just £5 for members and you can pick them up at club next Thursday. 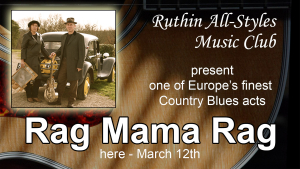