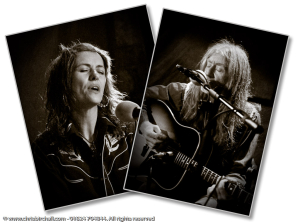 Whilst only 66.1% of the population turned out to vote last night, we had a massive turn-out at the club. There weren’t enough empty seats left to accommodate even the LibDems diminished quota of MPs!

And what a great evening’s entertainment it was. Hank’s Company Band headlined with a Showcase performance at the beginning of the second half. 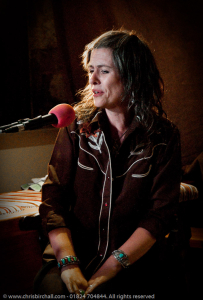 Singer/songwriters Emma and Paul, who hail from Rhuddlan, formerly performed as Hobo Heart and are now hitting the circuit again following a two year break. Their spot at Ruthin was the first of a whistle-stop tour of North Wales clubs in readiness for appearances at the Llangollen and Chester Fringe Festivals.

Their 30 minute set of country goodness started with four of their own songs: I see just fine, Keep up with the Song, Dredging the Lake and my personal favourite: Low Rental Blues. Then they wrapped it all up with a couple of excellent covers of Townes Van Zandt’s Colorado Girl and Orphan Girl by Gillian Welch.  These guys went down really well with the audience and I’m certain we’ll be having them back at The Feathers in the not too distance future. •Visit their YouTube Channel

Not only did we have a superb showcase, the support acts were pretty amazing too. No fewer than thirteen performers who  gave us three numbers each ranging from trad folk to contemporary numbers plus songs from the last six decades.

Apart from Emma and Paul, there were three new faces this week.

Sam, who edits and produces the substantial FolkLife Quarterly Magazine from his home in Malvern, Worcestershire, took time out of his holiday in North Wales to visit our club.

Dueting with his wife Eleanor he gave us a couple of traditional folk songs in both English and Welsh.

Then we had Pete who travelled up from Llanfechain in Powys with his pal Ian. Pete treated us to two instrumentals on mandolin and a frisky medley on the fiddle.

It was Ian’s second visit and his set included Lou Reed’s Sweet Jane and one of his own songs, My Life in a Stolen Moment inspired by having heard his musical idol Bob Dylan saying those words in an interview.

Another second visit was made by Colin from Leeswood way, whose numbers included some Pink Floyd covers.  I do like it when “new faces” gradually become “regulars”.

And speaking of regulars… there was a fine and eclectic collection of songs from the likes of Joe, Ros ‘n John, Enid and Neil, Glynne and Yours Truly.

The evening finale came from Penni. She did a couple of Ryan Adams songs (we all sang along to Dirty Rain) and then she sent us home giggling to the sound of Tell me if I say the Same Thing Twice.

More of the same next week folks…