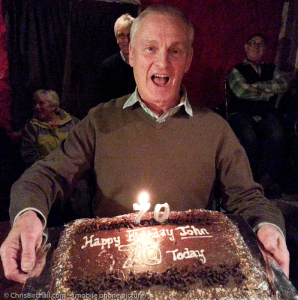 There was a great party atmosphere at the club this week with a packed house gathered to celebrate John Ryder’s 70th birthday.

John has been a member of Ruthin AllStyles Music Club since the early days and, together with his wife Ros, ran the club for four tuneful years up until last Christmas when they handed over the reins to Joe.

The evening went with a swing with Stephen up front acting as MC, Musical Director, Composer and General Jollificator.  (My spell check is having fun with that one!)

There had obviously been some secret rehearsing going on in the days leading up to last Thursday, as Steven got Ros up at the mic to join he and Joe in a specially re-written version of Happy Birthday Sweet Sixteen.  Then accompanied by Harry, Ros also did a solo number “There I’ve Said it Again”, a song she reckoned was as old as John!    And then when John got up to do his spot, she was at his side singing “Next To Me”.

Club regulars Richard, Tom, Joe, Phil Townson, Robin, Chris, Tom and Linda all contributed to the evening in their own special way.

It was nice to see some new faces on stage too.  We enjoyed numbers from a Quartet from Caerwys called Ar y Gweill and Rhyl Acoustic Club member Wendy delighted us with  some Nancy Griffith songs. Andy (who lives in Hertfordshire but is working in the area) amused us with some poetry and the song “I am my own Grandpa”

The highlight of the evening came right at the end, however, when Stephen sang Gregory Alan Sakov’s Stable Song accompanied by Tom Degney on violin.  We’ve seen Tom on guitar, mandolin, banjo, ukelale and dobro many times at the Ruthin Club but it was the first time we have heard him on the violin.  I have to say it was beautiful and faultless despite the fact he and Steve had not had a chance to rehearse it together.  the violin complimented the guitar and Stephen’s vocals perfectly.

The audience were mesmerised. It was the perfect end to a perfect evening.