We may not have Harry Styles as a member – but at Ruthin AllStyles we have a Harry with a style all of his own – and is certainly not limited to one direction!

A long standing regular at the club, Harry Robertson is renowned for his extensive repertoire of blues and country numbers, which include favourites such as Buddy Holly’s True Love Ways, Richard Thompson’s Dimming of the Day and Gone to Shiloh by Elton John & Bernie Taupin.

Having Harry host this week meant we got a bonus song from him for the evening finale.  And that song just happened to be my favourite “Harry song” – Hotel California by The Eagles.

He was joined on stage by Richard and John Bass before introducing a total of fourteen performers.

And there was an eclectic mix of styles and many fine performances from the floor. a couple of the highlights being Enid’s lovely rendition of Presley’s Can’t help falling in love to Neil’s impeccable guitar accompaniment, and Tim’s wee tune on the Border Bagpipes.

There were two new faces down from the coast this week in the form of Terry Mealey and Des (pictured below).

T for Terry gave us T for Texas and two other fine country numbers of the style for which he is renowned down at the Rhyl Folk and Acoustic Club.

Whilst Des’ set included two of his own songs, one about Childhood Memories and a hilarious ditty entitled When my wife met my girlfriend.

It was another great night down at The Feathers.
More of the same next week! 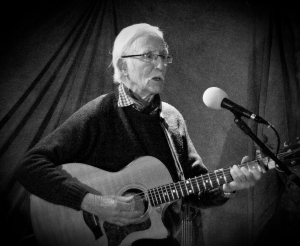 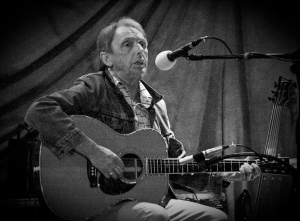