Spring is sprung,
The grass is riz,
I wonder where,
The music is.

It’s at The Feathers, that’s where!

And what a fine evening of music it was. No fewer than sixteen troubadours and balladeers trouped in to herald the first day of Spring – and with almost double that number in the audience, all with a spring in their step, it made for a lot of feet tapping along to the music.

It was good to welcome Mike Kendrick back. We don’t see enough of Mike, even though he lives in Ruthin, because he’s kept busy playing in two bands, the Shambolics and The Dansette Alligators.

Mike opened the first half in lively fashion with the 80s hit by John Hiatt & The Goners, “Like Your Dad Did”. Later in the evening, he celebrated Wales’s recent rugby win over Ireland with one of his own compositions, “The Llanfairfechan Horse”, a song that alludes to the notion St Patrick was, in fact, a Welshman!

Mold musician and Guitar Shop owner, Mike Hastings also made a welcome return for his second visit in as many years. He opened his set with Dinah Washington’s “Backwater Blues”.

As well as a fabulous array of performances by the usual suspects, drawn from our ever growing list of ‘regulars’, we welcomed a new face in the form of young Catrin Francis. Catrin had travelled over from Chirk with ‘Mr Narrowboat’ Mark Holdsworth to help promote and sell copies of the newly released Narrowboat Sessions charity double album. (We now have them for sale here at the club for just £8.50, or you can order online from https://thenarrowboatsessions.com/ for £10 including postage).

After enchanting us with two lovely numbers, performed a cappella, Catrin confessed she hadn’t really sung in public before.

Skeet Williams was very much in demand, accompanying both Glyn Hudson and Deborah Jackson in addition to his own spot, in which he held the entire room in awe with his finger-picking skills on two guitar solos including a medieval melody from 1538.

Just two weeks after wowing us with a wonderful concert night, Gary Edward Jones was back to officially announce that his “Something About Simon” show (see the trailer below) has been booked to play all 27 nights of the prestigious Edinburgh Festival in August.

Gary had spent the day going over his Paul Simon material with the show’s director Gareth Tudor Price, so for tonight’s floor spot he treated us to two of his own songs “Take Me Back” and “King for a Day”.

Gary’s wife Elizabeth also joined us, so we had an ‘Elfin Bow’ finale consisting of her own compositions, “Sister o Sister” and “Mother Said”, following up with an encore of “Prairie Madness”.

It was yet another fabulous evening of music.  We are so lucky to have such a wealth of talented and enthusiastic musicians turning up week after week. 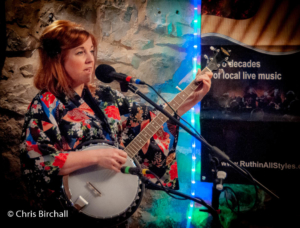 It’s something that really comes home to you when hearing the remarks visitors make at the end of the night.

Visiting our lovely town for the first time, the aforementioned Gareth Tudor Price, a musical theatre director no less, was heard to say he was knocked out by all the performances and couldn’t believe such a great evening’s entertainment had cost just £1.50.

Ruthin AllStylers – you should be proud of yourselves, every last one of you.