Hot-spot amid the Arctic chill 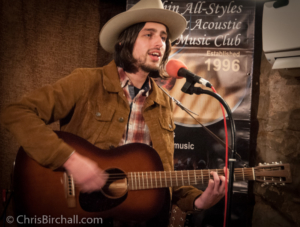 With the snow lingering, and the temperatures still plummeting, we’d had to make the decision to postpone the club’s Christmas party for a week.

As we were setting out the room and the new P.A. equipment, (yes, new – but more of that in good time), I couldn’t help thinking we were in for a quiet night.

It seems, however, that the AllStyles folky folk are made of sterner stuff.

In the end, we had eleven musicians and a total of twenty-seven in the room, although it must be said that the majority had arrived from further down the valley, and from the coast beyond, where they’d been basking in temperatures of almost One Degree Celsius.

Music to warm the soul 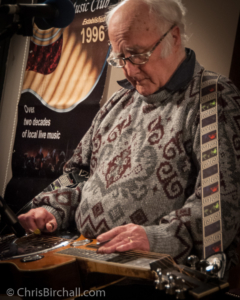 The music got underway with Rhyl’s Brandon Ridley, who, in his trademark stetson, was looking cool and sounding hot.

Geoff Hollis, from the same neck of the woods, was next, with Bob Neale from Denbigh hot on his heels.

Then it was Jeff Jones, followed by myself, who were flying the flag for our little town, before handing the mic back to another of the Denbigh contingent, Glyn Hudson.

Tom and Lynda Degney had jetted-in with some sounds of summer, from the Riviera that is Rhos-on-Sea.

Then Penni Neale warmed us all with her mellifluous voice and dulcet toned guitar.

It was Robin the Busker who took us hot-foot to a rip-roaring finale, accompanied by Tom and Ruthin’s third representative, John Rowell, on his fretless bass guitar.  In fact John and Tom were kept busy throughout the evening, providing bass, mandolin and dobro accompaniment at every opportunity.

The Christmas Knees-up
So next Thursday we hope to see all these friends from the lowlands and coastal plains, joined by our hill-dwelling members for what promises to be the best Christmas Party we’ll have had all year! 😉

No need to bring rations this time, as the club is providing all the eats. Silly hats and funky jumpers are optional. Song and laughter are obligatory.

See you all next Thursday 7.30pm at The Feathers.

Banding Together And the bells were ringing out for Christmas day