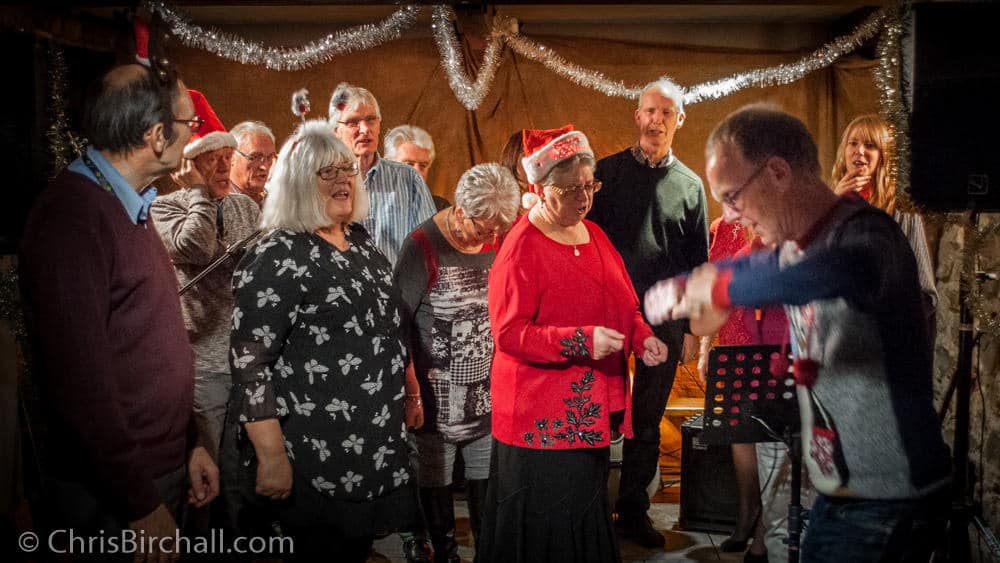 Well okay, we’re not quite there yet. But this week did see our first Christmas ‘do’ since moving to The Feathers.

And what a ‘do’ it was! Left legs were first put in,then put out and things were shaken all about. 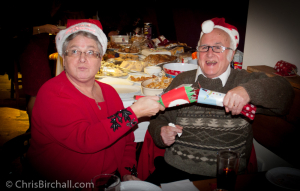 Alright, so no one actually sang Black Lace’s Hokey Cokey. But you get my meaning. Lots of fun was had by all in attendance and the whole evening appeared to go down well with everyone – much to the relief of Jayne and I.

You see, this was the first time in the club’s recent history that Christmas happened at a venue that didn’t do food. In the past it had always been appropriate for a formal sit-down meal to be catered by the venue or at least (as happened last year at the Cross Keys) have them lay on a buffet.

This year we ventured into uncharted territory. I’m sure that many thought we were stark raving mad to even contemplate putting on a self catered Christmas Buffet with no firm idea of numbers — and still only charge the usual club night £1 per head!

Well we did have a safety net.  Although we were laying on the sandwiches, the £1 per head came with the proviso that everyone also brought a small contribution to the finger buffet. That way, the more people that came the more food there was to go around. Genius! (I reckon that’s how Big J managed to feed the 5,000 with just five Warburton medium sliced and a couple of tins of salmon). 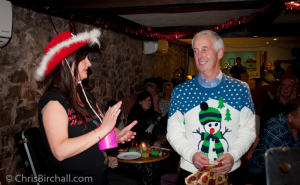 So if we were to follow suit all we had to do was guesstimate roughly how many might turn up, then double it and take away the first number you thought of…

Hmmm! We settled on forty and, reckoning the average music club attendee might have a bigger appetite than the aforementioned biblical multitude, we dug into the club funds for half a dozen Warburton’s and the obligatory two tins of salmon …plus several bags full of eggs, tuna, ham, cheese, pickle, mayo, cucumber, foil trays, serviettes, Christmas crackers, etcetera. 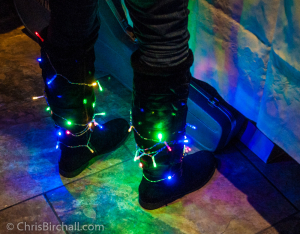 Several kitchen hours later Jayne had magically transformed the ingredients onto a raft of wonderful platters of posh butties (i.e, with the crusts cut off!).

Jayne always lights up the room when she walks in and tonight was no exception – possibly due to her choice of footwear as she laid out the buffet table! 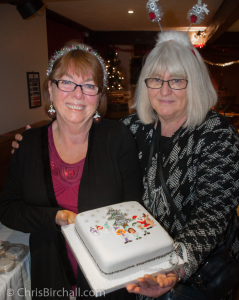 In cahoots with Penni and Bob Neal, Glyn donated a wonderful Christmas cake (see the picture) decorated by her own fair hand.

Master luthier Harry Millar gave us a voucher for a guitar set-up/service and tutors Ronnie Parry and Skeet Williams gave us vouchers for guitar lessons. These were auctioned during the evening. 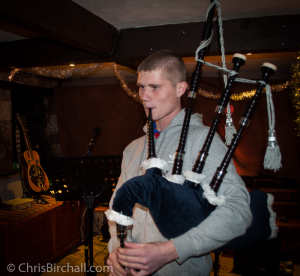 In all, we had forty-two through the door and that included twenty two musicians who provided a fine selection of songs and tunes during the evening, many of which were suitably Christmas themed.

There were so many wonderful performances, all of which went down well with the festive audience.

And we even had a random piper wander through from the main bar playing “Scotland the Brave”.

So all in all the evening was a resounding success and that certainly seems the case judging by all the kind messages we have received.

Best of all, despite only charging the usual entry fee, thanks to the raffle, the auction and the donated prizes etc., we did it all without denting the club’s bank balance.

New Faces from Distant Places T’was the Thursday before Christmas