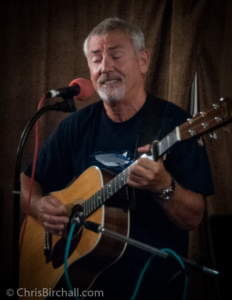 The nice thing about holding our music nights on a Thursday is that the pub is usually quiet, with little more than distant laughter and a bit of banter filtering down the corridor into the function room.

…except on Denbigh and Flint Show Day!

And who can blame them. After a long muddy day in the company of sheep and tractors, all they want to do is party party party!

Maybe we should consider an alternative strategy for the August 2018 show day. Ideas on a virtual postcard please 🙂

Despite the shenanigans during the last hour and the crush at the bar, we had a fine evening (albeit with the PA having to be cranked a little higher than our normal sedate settings), with a round dozen performers playing to a comfortably full room.

Plane Sailing
With his wonderful baritone voice, so reminiscent of that great country singer, Richard Eastwood’s set list acknowledged the fact Jim Reeves was born on this day 93 years ago. Jim Reeves, of course, was tragically killed in a plane crash in 1964. 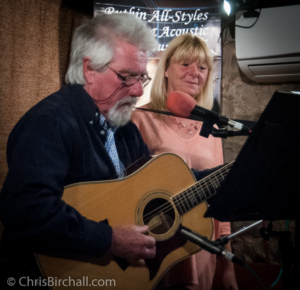 With a sweet voice an octave or two higher than her husband’s, Wendy Eastwood gave us a lovely set of songs by Patsy Cline, who also died in a plane crash.

Next up was Joe Lyon with a great cover of “Starwood in Aspen” by John Denver, who…  Hang on, where is all this going?

I was up next, and so I resisted the temptation to keep the theme going with a Buddy Holly number, and opted instead for  “Brown Eyed Girl” by Van Morrison, who I strongly advise should stick to travelling by boat and by train.

Richard Ruthin was joined by Tom Degney on dobro to produce some good ole country music, with Wendy providing lovely harmonies on “Heartaches by the Number”.

Tom then sang his “Dr Jaz” medley before accompanying Lynda on the Richard Marx song “Hazard”. 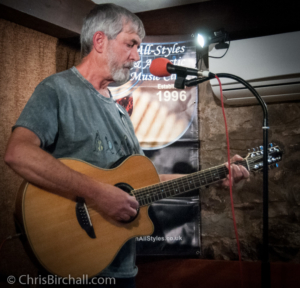 Peter Leslie brought along his 12-string, which fitted the bill admirably for his cover of Pink Floyd’s “Wish You Were Here”, as well as his own song “The Busker” and Neil Young’s “Heart of Gold”.

An Abergele trio comprising Gaz, Hade and Dave were making their second visit to Ruthin AllStyles. Last time they were a band with no name, so we called them GHD. Tonight they turned up as ‘Top Notch’ and gave us “Harvest Moon”, “Gangsters” and Hawkwind’s “Quark, Strangeness And Charm”.

Sheffield musician Alan Gill was making his Feathers debut, although he had played at the club a few years back, when we were at The Cross Keys. For his first set, he sang George Harrison’s “Here Comes the Sun” and Tracy Chapman’s “Baby I Can Hold You”. 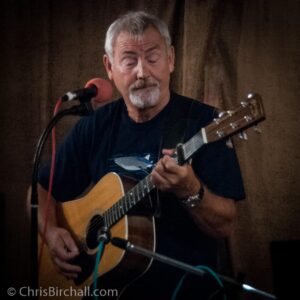 Following the beer break we went around again with one more song each, after which we brought Alan back for the finale spot with a fine helping of Ralph McTell, including “The Hiring Fair” and “Let Me Down Easy”.

It was 11.00pm and we all drifted home, far from the madding crowd, resisting the temptation to join the karaoke and disco antics ’till 2.00am, through in the main bar.

I must be feeling my age! 😉