Making his second appearance at the club, was young Harri from Rhewl. With a voice reminiscent of the Gallaghers, Harri gave us “Lucky Man” by The Verve and the Stereophonics’ song “Maybe Tomorrow”.

[/one_half] No sooner had Tom Degney sat down, he was back up front to provide Lynda’s musical accompaniment with some “Bluegrass Music” and then to do his own solo spot which included “Land of the Navarro” complete with resounding Red-Injun noises from the audience. 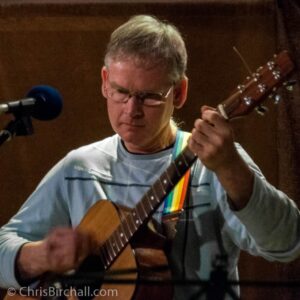 Tom went for a lie down, and Glyn Hudson stepped up to the mic with the traditional Appalachian folk song “Once I Had a Sweetheart”, as sung by Joan Baez among others, followed by “Where have all the Flowers Gone” with many of the aforementioned ‘Injuns’ joining in on the refrain.

“Comedians and Angels” was Joe Lyon’s first song, and for his second he chose “The Way You Look Tonight”. I was up next with “Mr Bojangles” and the Dr Hook classic, “Ballad of Lucy Jordan” which Tom sneakily filmed from his table.

And Tonight Matthew, Bob Neale is going to be Bob Dylan, with “One Too Many Mornings”, then he took us up to the break with Woody Guthrie’s  “Vigilante Man”.

After the raffle, Robin launched the second half with “House of the Rising Sun”. 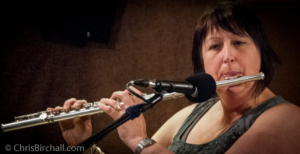 Next up we had a duo from Cerrigydrydion making their Ruthin AllStyles debut. Di and Pete (above and left) performed a lively foot-stomping medley of Irish tunes, Di on flute and Pete on Guitar. They followed this with a lovely home-grown song written by Di, the title of which I missed.

Another duo next: Enid and Neil went all Beatles on us, with “Imagine” and “While My Guitar Gently Weeps” (do listen to the track at the top of this page).

The long distance award this week went to a gent by the name of John Williams (below right) who was over from Capetown visiting relatives in Ruthin. He’d discovered our little club and decided to join us for the evening. Singing a-Capella, he treated us to “Sea Fever”, “Irish Ballad” and a Scottish folk song called “Fisherman’s Galley”. Very entertaining he was too, with some humorous yarns in between. 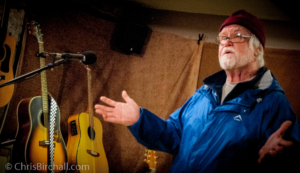 Penni Neale broke into Welsh to deliver a lovely version of “Myfanwi”, then sang Pete Townshend’s “Behind Blue Eyes”, as featured on The Who’s 1971 album “Who’s Next”.

Who’s Next…? Jack Eagle, that’s who. He and his Breedlove guitar were as one, as he sang the Cat Stevens hit, “Wild World” and then one of his own songs, “Pendulum Jaw”.

It’s always good to hear original songs amongst the covers at the club. Wrexham’s Peter Leslie is another fine songwriter, and tonight’s offering was “My Boat is Drifting”, which he followed up with a great version of “Caledonia”.

There was just time for a couple more songs, so we brought young Harri back to sing the Oasis classic “Half a World Away”, which absolutely confirmed my theory of his Gallagher-like voice. The song was met with a good deal of audience participation too.

Then for the finale we were treated to more wonderful Irish jiggyness from the flute and guitar of Di and Pete. They played us out with “The Moon Song” and “Pipe on the Hob”.`

It was another fine and varied night of music in the cosy and friendly atmosphere of the function room at The Feathers. Fifteen turns (seventeen musicians if you count the duos) played to a full and appreciative audience.

And next week, we do it all again!