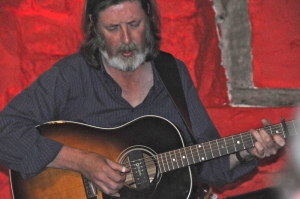 Thursday 18th August 2011 was the first guest night that Ruthin All-Styles Music has held at the Cross Keys. And with Jim Crawford as our guest, the usual high standard was maintained.

As an impressive multi-instrumentalist, Jim kicked off with Bukka White’s ‘Jitterbug Swing’ on his slide resonator.  Then he played a few on his Gibson before moving on to the banjo. 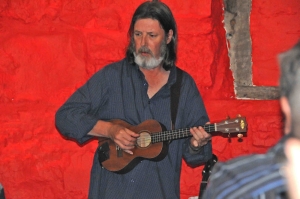 Finally he played the ‘jumping flea’ (or Ukelele to we non-Hawaiians).

Although Jim is an expert blues player, with an excellent ‘feel’ for the genre, he also is on top of other areas, such as bluegrass and folk, plus he writes his own fine material. The audience were delighted with his performance. (And, by the way, many thanks to those of the audience who travelled long distances to be with us).