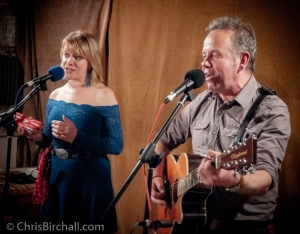 Appearing as the duo, Tennessee Waltz, Jimmy and Sarah treated us to a splendid evening of Country, Americana and R&B.

For a lively start to their first set, they put their foot on the gas with the song of that name which features on their album from their trio incarnation, Jimmy Rae and the Moonshine Girls, followed by another original, “When We Are Old”.

Their set leaned heavily on Americana with some great covers amongst their home-grown songs, including the Elton John/Bernie Taupin classic “Roy Rogers is Riding Tonight” (click ► below) and the beautiful  “Crazy”, written by Willy Nelson.

This first set was brought to a close with two songs written sixty years apart: “Eddie’s Guitar”, penned by Jimmy, telling the story about Eddie Cochran who died in a tragic motor accident during his British tour back in April 1960. This segued seamlessly into the  American rock star’s classic, “Summertime Blues”. 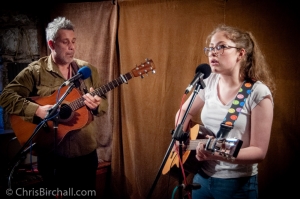 Full Supporting Cast
Prior to Tennessee Waltz taking to the stage, we had a round of floor spots from our regulars, and after the mid evening break, it was the turn of Skeet Williams who gave us a great guitar solo before being joined by Fuchsia Jones, accompanying her on “Tennessee Whiskey” and the beautiful Welsh language song by Gwyneth Glyn, “Dy Lygaid Di”. (Click ► below to play)

Next we had a song from Paul Reaney, called “A Town Like This”, the title track of the Birkenhead singer’s 2007 album.

Sarah and Jimmy had brought Paul along for the ride. But it wasn’t a free ride, far from it, as he joined the pair for many of the songs in their second set. He certainly earned his keep by adding some great guitar riffs along the way. 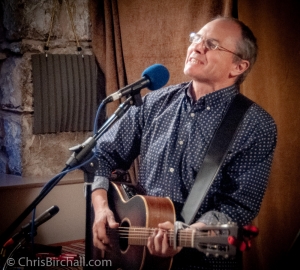 Just as in the first half, many of the songs were up-beat with Sarah Lou’s voice in sweet harmony to Jimmy’s rocky tones. These were interspersed with gentle ballads, many with Sarah taking the lead vocals, reminiscent of the great Patsy Cline.

And before we knew it, finale time had arrived. “Under The Mersey Moon” is a lovely song off Tennessee Waltz’s latest album “One Day”.

Then for an encore they gave us a good old country song in the form of John Denver’s “Country Roads” with the whole room joining in.

The Last of May 14th June Singers’ Night