One of the nice things about our club is that you never know who is going to turn up. There were the usual suspects of course, including Tom, Dick and Harry who got the evening off to a flying start with fine R&B and country blues set, with John Bass keeping them all in the groove.

Peter Leslie, from Wrexham visited us for the first time last week to see what we are all about.  This week he was back again, this time to road test his guitar after Harry Millar had worked his magic. The master luthier himself was sitting in the front row nodding approvingly – not only at the lovely rich sound but also at Peter’s playing style as he sung two of his own compositions, Just Dreaming and Sea of Clouds.

Chester hails from Llandegla and is an accomplished musician who’s played in several bands including Chester and the Pole Cats and Stone Blue .

A multi instrumentalist, Chester’s current weapon of choice is the steel lap slide guitar on which he performed a bluesy set that included John The Revelator which he sang very much in the style of Curtis Stigers, as featured on the biker television series Sons of Anarchy.

Ben Robinson is a young man from Halkyn Mountain who is becoming well known on the folk circuit. His impeccable fingerstyle playing was evident throughout his set which included a lovely instrumental and Ralph McTell’s ‘The Girl From The Hiring Fair’.

Ben can be seen performing this weekend at the Folk at the Hall in Trelawnyd and later this month in the Folk on the Farm festival on Anglesey.

Joe Lyon went all Joe Brown, Chris went all Neil Young, John & Ros yodled and went all French (although not at the same time!), Glyn went acappella with some lovely traditional folk songs and Wendy did what Wendy does best with that ‘voice of an angel’ of hers.

Well all I can think is they must have lowered the retirement age considerably because during the break we celebrated Lynda’s milestone birthday with cake and John Rowell’s “not quite milestone” birthday with more cake.

We all know that when Lynda sings about rain – it rains! So the umbrella we bought her came in handy when she sang A Walk in the Irish Rain for us!

The flamboyant “Elton John” style sunglasses we got for John prompted a change of instrument.  It’s been a while since we heard him play acoustic guitar and sing. His Lady Eleanor was superb. 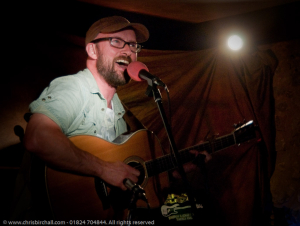 The standard of musicianship throughout the entire evening was absolutely fabulous – so good in fact you’d have been justified in saying, rhetorically, “top that!”

But top it we did! For we were fortunate to have none other than Joe Topping come over from Merseyside to perform a forty minute Showcase for us. Joe is a professional musician with a great voice, easy guitar style (in the manner of making something complex appear so easy) and a wonderful talent for songwriting. He is currently doing the rounds promoting his new album The Vagrant Kings and tonight we were treated to a number of solo acoustic versions of its tracks as well as some as yet unreleased songs.

My own personal favourites from the night were Cat on a Cold Slate Roof and This Love and Lack of Money will be the Death of Me.

The album itself takes a sideways glance at the Folk scene, infiltrating the genre with the blues and Americana influences he picked up whilst walking 1400 miles with a guitar on his back from Chicago to New Orleans to raise money for hurricane victims!

It was recorded in their keyboard player’s studio using a wonderful collection of vintage mics on Joe’s bottleneck slide guitar, the Hammond organ, a pedal steel and percussion.

If you liked hearing Joe at the club, I urge you to buy the album. It really is tasty.

Phew! What a brilliant night of music that was!