The function room at The Feathers was comfortably full as our guest musician Jon Coley opened with the very first song he’d ever learned to play. It was the Bert Jansch version of the traditional Irish folk song, “Down by the Black Waterside”. 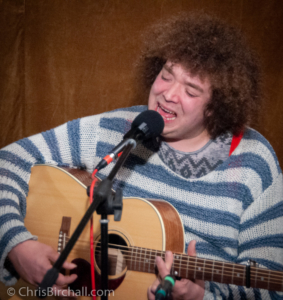 He followed on with a selection of self-penned songs, many of them autobiographical, interspersed by some covers performed is his own unique style.

Playing on his trusty Gibson, we witnessed some nifty fingerstyle melodies and gained an insight into his skills as a wordsmith and storyteller.

One of my personal favourites from this set was a song he’d written for his sister, entitled “Good Girls Have Bad Dreams”. And of his covers, I fell in love with his interpretation of Woody Guthrie’s “The House Carpenter”. Watching Jon’s fingers made me feel dizzy as he executed the rolling riffs, and the bluesy Jerron Paxton number “Cocaine Blues” was just sublime.

Jon brought the first half of the evening to a close with the first public airing of a brand new song about living with your mistakes, “A Sweeter State of Mind”.

As is the norm for our concerts, both of our guest’s sets were preceded by a round of floor spots.  No fewer than eleven of our talented regulars performed up to two songs each, providing a fine and diverse mixture of genres and styles, acting as the perfect foil to Jon’s bluesy folk numbers. 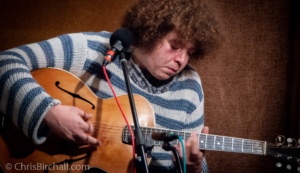 For his second set, Jon brought his other two guitars into the equation, the most interesting of which was a lovely old f-hole jazz guitar dating back to 1935. This had been given to him by a fan whose father had played it back in the day with the Duke Ellington Band. Jon did the old guitar deserved justice as he delivered some lovely ragtime blues in the form of the Muddy Waters, song “Turn Your Lamp Down Low”.

More great songs followed, each one introduced with a little back story, and after his last song “Can’t Make It Rain”, Jon responded to the calls for more by abandoning the microphones and walking amongst us to perform his encore completely unplugged.

It was a beautiful finish to a lovely evening of fine music.

The floor spot performers tonight were: