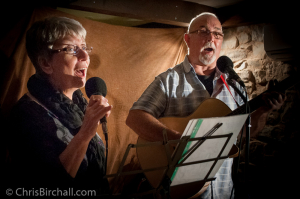 In an ideal world we’d all manage two numbers in the first half and one (sometimes two) in the second.

Last week started off that way but then you all kept coming!  As more singers arrived, the decision was made to give everybody three numbers straight off and not have a “second half”.  The idea being that three in one set, takes less time than two plus one, due to the change-over time.

In theory! But then you still kept on arriving!  And Wow!, everyone was so good I just didn’t have the heart to start cutting it back down to two numbers each.

Don’t get me wrong, I’m not complaining. Nineteen performers in all contributing no less than 44 songs made for a fabulous evening’s entertainment.  And everyone present certainly got their quid’s worth – and more.  But it did mean we went on beyond many people’s regular Thursday evening bedtime! 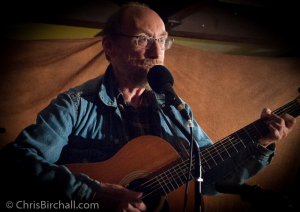 This week looked like following a similar pattern, so we kept it to two songs each and ended up with sixteen performers whose sets took us nicely up to our usual 11.00pm closing time, the last being from Penni Neale who treated us to a lovely medley of Beatles songs.  But before calling it a night, we brought back Robin to perform the finale he didn’t get time to do on his hosting night last week.  And a belter it was too, with Peter Stevens and Tom Degney joining him to provide additional instrumental support.

The whole evening was again first class.  The “Tom, Dick and Harry” combo were joined by Raphael Callaghan on harmonica. And he later reverted to guitar to treat us to two of his own songs. 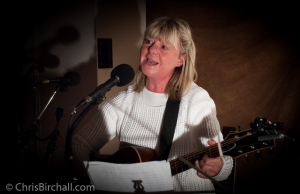 Wendy and Richard between them delivered a lovely varied set as did Tom and Lynda – and yes of course, we all joined in tapping our glasses like amateur campanologists when she sang “Ring the Bell”.

We always enjoy Barry Evans’s yarns and tonight was no exception. After singing “Caledonia Calling Me”, he sang the poignant Hugh Williams song “Summer Before the War”.

There were Tom Paxton goodies from Peter Stevens, Roy Orbison from Joe, Dylan from me and “Hallelujah” from Enid. 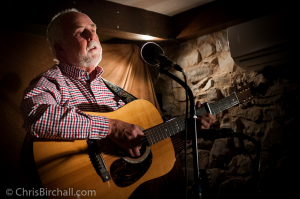 Peter Leslie never fails to wow us with his gentle voice and immaculate finger picking style. Add to that, his song writing skills and you are guaranteed a great set.  This week we heard about a soldier who “lost the bloody war” and a song he wrote under the Greek sunshine this summer called “Lucky Few”.

John and Ros brought two visitors with them this week. Lancashire couple Peter and Sandra heard them perform a set that included “My Old Rocking Chair”, “Mr Sandman” and Jeff Lyn’s yet to be released single “When I was a Boy I Had a Dream”.

All super stuff. Next week it’s Singers’ Night as usual with a little extra showcase spot from Australia’s “Quintessential Quirk” Karen White.  It’s gonna be good, so don’t be late!