That headline is so wrong of course. There never is “just another Singers’ Night” these days, because every club night is different. You never quite know who is going to turn up – or how many.

And that’s what makes Ruthin AllStyles what it is – diverse and interesting – providing an eclectic mix of roots, blues, country, R&B, and folk.

Plus of course, the ‘folk’ genre itself is going through a constant metamorphosis, encompassing traditional and contemporary folk, as well as the ever-present folk rock, pioneered in the sixties by the likes of The Byrds, Dylan and The Beatles. The music of these pioneers, as well as some of the less well known whilst equally influential, such as Richard Thompson,  Richard Shindell and Kieran Halpin, can be heard pretty much every week at the club.

Lucky Thirteen
I kicked things off this week with a bit of Bob Dylan and Damian Rice, before introducing  no fewer then twelve other performers.

The first of these was Colin whose set included a nice version of the Jimmy MacCarthy song “Ride On”, originally made famous by Irish folk singer Christy Moore.

Mike Whittaker was next, with Lennon & McCartney’s “For No One” followed by his own song “My Old Man”.

The a cappella offerings from Glyn included “Go Lassie Go” and “Gypsy Rover”. Country was the style from Lynda with John Denver and Ricky Nelson songs, followed by a bluesy set from Richard that included Steve Earl’s “Just a Pilgrim”.

Tom Degney brought a new toy along this week, in the shape of a six string ukulele that he’s been given as a thank you for running a class at one of the recent festivals he’d attended. Unfortunately it only had four of its six strings. A mere detail that didn’t phase our Tom in the slightest, as he strummed and picked his way effortlessly through the “Theme from the Third Man”.

Joe was back following his world tour with Wellcomme, Finnan and Crimes (well, just Llanfynydd really) but it meant the world to Joe that they had invited him to join them for “The Goodnight Song”. He reprised the performance tonight, and remained in nocturnal mode with “The Night Has A Thousand Eyes” and “See You In My Dreams” (I do like in when people consider the review writer when choosing their song titles!! 😉 )

Then Tom Goodall rocked us up to the break with a couple of his own songs “Stronger Than Steel” and “Britney”. 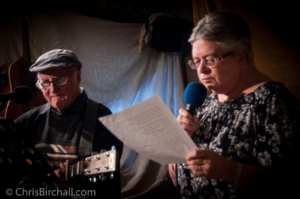 The big news during the break was that, for once, Lucky Lynda didn’t win the wine! Then we sang “Happy Birthday” to John Rowell before getting him to open the second half of the evening by singing back to us. His set included two Clifford T Ward songs “Where’s It Going To End?” and “Time, the Magician Played a Few Old Tricks on Us”.

Peter Leslie’s set included his own song “My Boat is Drifting” followed by two Kieran Halpin songs “Friend For a While” and Love Takes You”. Peter has long been a fan of Halpin and along with the rest of us is looking forward to the man himself performing for us in Ruthin on August 18th.

Bob Neale took us all back to the sixties with a couple of Donavon classics “Ballad of a Crystal Man” and “Catch the Wind”. 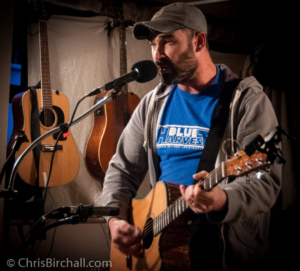 And so another great night drew to an end, most of us having contributed up to three songs each.

The finale spot this week went to Rhyl’s Tom Goodall who informed us in true folk rock style, that it was time to “Hit the Road Jack”. It was a fabulous performance and I, for one, still had it buzzing around my head as I tucked into my 1.00am tea and toast.

See you all again next Thursday!

A Welcomme at The Feathers – with Finnan & Chrimes too! Northern Invaders