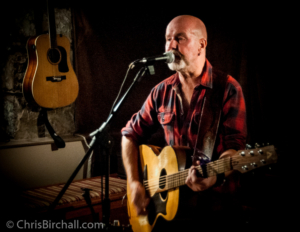 It’s certainly not unusual to hear a Kieran Halpin song being sung at Ruthin AllStyles. Several of our members have one or more in their repertoire. In fact, tonight must have been the first time in the past several weeks, that Peter Leslie hadn’t turned up with yet another under his belt!

He didn’t need to of course, because tonight those songs came straight from the horse’s mouth.

They came fast and furious. They came sweet and sublime. This quiet and unassuming Irishman certainly knows how to break out a lyric and weave it into a melody. It is no wonder that his songs are so popular. 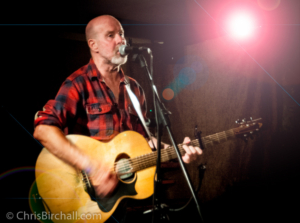 I had personally never been a “follower” as such. Yet time and time again throughout the evening I found myself thinking “I know this one”. These were songs I’d heard many times over without fully realising their provenance.

It seems I had in fact been a fan all along, quite by accident – and definitely a future follower.

Kieran Halpin’s songs are musical maps of his journey through life. His tools are observation and understanding. You can imagine folk would hardly notice him as he sits in a crowded bar listening and watching, gathering stories and adding colour to his lyrical palette. 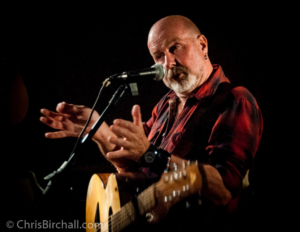 Meeting Kieran for the first time, I have to admit I found myself wondering whether this taciturn gent from the Emerald Isle would eventually crack a smile.

He did. Just one or two, mind. But when he stepped up to the microphone, the smiles were all on us. His humour was subtle and dry, and we thoroughly enjoyed the craic. Each song was introduced with a tale and with a twinkle in his Irish eyes, and he teased us all into joining in on the choruses.

His first set opened with “Walk like a Champion” and ended with his hilarious take on teenagers, “Bat in the Attic”.

Along the way we took in the likes of “Everyone Loves Someone”, “Sorrow”, the uncharacteristically optimistic “Angels Are Smiling”, and an angry protest song, “Ben Parkinson’s Friends”, citing the futility of the Blair/Bush engineered Afghan War. This was tempered by the lovely “Long Lost Friends”, and one of his most commercially successful songs “All the Answers”, recorded by Dutch country and pop singer, Ilse DeLange.

And at the same time we learned about his travels, trials and tribulations, and how within the short space of little more than a week he will have visited Holland, Wales, Scotland, Northern and Southern England before returning to Germany where he currently lives.

Whilst engineering the sound during this first 45 minute set, I felt I had got to know, and really like, this talented and gentle man. 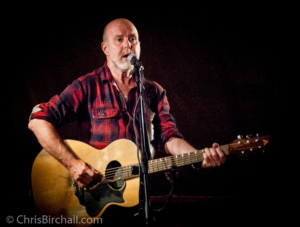 Floor Singers
During the opening round of songs from our floor singers, as well as the one that followed his performance, our guest respectfully remained in the room to listen to, and appreciate our own efforts. This is a courtesy we applaud and appreciate.

It was Penni who kicked off the evening appropriately with an Irish lullaby, “Tura Lura Lura”, followed by Peter who sang “The Busker”, and Lynda with “Only You”. I paid homage to Bob Dylan, and Mike Whittaker sang “No-one will Love Me Like You Do”.

Nine of us regulars did two songs each. Tom Degney started the second set of floor spots off with his “Dr Jazz” medley, Glyn told us “The Lark Sang Melodious”, and Joe’s message was “Don’t Let the Sun Catch You Crying”. The last of our members to sing before rejoining the packed audience for Kieran Halpin’s finale set was Peter Stevens with “Carry a Torch for You”.

The beautiful “Sleep With an Angel of Paradise” was a brilliant opener, followed by “Nothing to Show for it All”,  “New Years Day”, and “Glory Days”. With a glance at the clock he announced his last song would be “Closing Time”. This took us way past closing time and Kieran disconnected his equipment. But we wouldn’t let him go without an encore, so he came into our midst to sing “I Will Remember Love” completely unplugged. It was a lovely end to an evening filled with beautiful music.

Pints, Pipes, Poets and Euphonious Southern Songbirds A Baker’s Dozen, a New Face and a Gaggle of Gremlins