Harry, Richard, Tom and John Bass got the evening off to a fine start with a set featuring mixture of Country and Blues.  This included Wayne Carson Thompson’s Baby Wrote me a Letter and the Brokeback Mountain theme He Was a Friend of Mine. 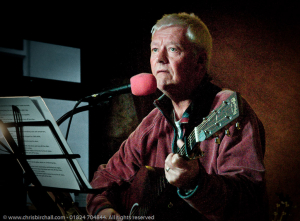 It was nice to see our old friend Phil Townson back at the club. It was his first visit since we moved to The Feathers and he sang three of his own compositions. Two old favourites If I Ever Get to Graceland and The Piper of Galloway plus a brand new song Night of a Thousand Dreams.

John and Ros became “Acoustic Velour” for the night with their rendition of Electro Velvet’s Eurovision Song Contest song Still In Love With You before recruiting Joe to join them on the mini maracas as chief mover and shaker as they sang Alley Oop!

Stephen went all Stereophonic with Have a Nice Day and Mark’s set included the John Martin song When the Hurt in your Heart is Gone. 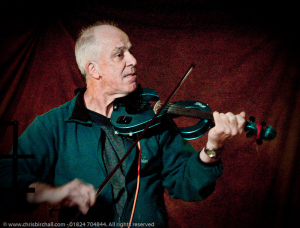 Tom had a busy night accompanying all and sundry on his mandolin and dobro before picking up the guitar to accompany his wife Lynda  singing their favourite “audience participation” song about wolves and coyotes followed by a lovely Mary Black number.

We had Sinatra’s The Way you Look Tonight and John Lennon’s Woman from Joe and a jolly jig on the fiddle from Jim. Then more Lennon from Enid and Neil in the form of Imagine plus Bob Dylan’s Is Your Love in Vain.

The show drew to a close at 11.10pm in the same manner it started, with a fine finale by the Tom, Dick and Harry – plus John Bass combo.

Fifteen performers in all, making it yet another great evening’s entertainment – and all for a round pound!