…or at least, three days after.

According to Wikipedia, May Day is an ancient spring festival that involves dancing, singing, and cake as part of the festivities.

No cakes, but we certainly had the singing – and plenty of it, from a dozen minstrels, and there was foot tapping aplenty from the audience of twenty-odd, gathered in the function room at The Feathers. 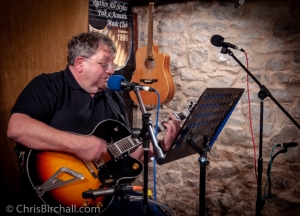 Chris, and Joe Lyon got things underway with a set each, followed by Pete Kirkham who had Cath Bryan riding shotgun (except that she had a guitar, not an actual shotgun 😉 ).

John Helm (right) had turned up to give his brand new Gretsch its first public outing.

Another first was a debut a cappella performance by Rhodri Hampden Jones. who gave a fine performance in Welsh. 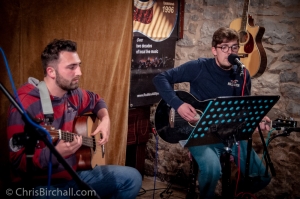 And yet another first came courtesy of Ceidwad Y Gân band members Oli and Sam, (left) who performed tonight as a duo.

Then it was over to the ladies. Glyn Hudson always manages to rouse the room into community singing to accompany her set which included “Donna Donna”. Cath Bryan’s set included a lovely version of “Good Year For The Roses”. And Penni Neale touched a patriotic note with “Green Green Grass of Home” by singing it in both English and Welsh.

The third excursion into the Welsh language came from Enid Toft who sang a translated version of Bob Dylan’s “Make You Feel My Love”. Enid also performed the finale spot with the impeccable guitar accompaniment of Neil Wilkinson, as they gave us George Harrison’s “While My Guitar Gently Weeps”.

Join us next Thursday for another night of music at The Feathers.