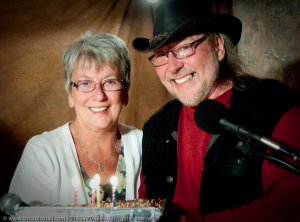 I thought I’d got away with it…

Being away on holiday last week, my birthday slipped quietly by without any fuss. Or so I thought!

I’d prepared my notes ready to embarrass this week’s birthday girl, Enid, when George scuppered the plan by initiating the customary birthday sing-song for both of us – all done in cahoots with Jayne who had sneakily provided cake!

As George commented on his GeorgeLIVE Facebook page the next morning:

“The cake had so many candles it looked like an industrial furnace as it travelled through the room!!!  Many congratulations to Enid and Chris on their birthdays and to Chris & Jayne for their wedding anniversary.

Candles extinguished and cake distributed, we got back to the music – and wow what a great night it was, with no fewer than nineteen stepping up to perform!

John and Ros kicked things off with a set that included Mucky Kid in tribute to Cilla Black who sadly died last Sunday.  The world of music also lost country singer Lynn Anderson at the weekend, aged just 67 and it was nice to hear everyone joining in as I covered her song I Never Promised you a Rose Garden.

Someone rumored that Elvis had died too but George said It’s All Right Mama! before moving on to Don’t Let the Sun Catch You Crying. 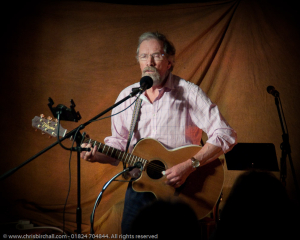 Then we had two Peters in quick succession. Two completely different styles and both excellent musicians.  Peter Leslie sang songs by Fairport Convention and Ralph McTell; then Peter Stevens covered Tom Paxton and Tom Waits. His setlist amusingly read: Leaving Home followed by I Hope My Pony Knows the Way Back Home.

Joe has been threatening to do some Roy Orbison for a few weeks now. He did Too Soon To Know and he did us proud!

With John Rowel on bass, Richard and Harry accompanied each other for their sets which included Galway to Graceland and Dimming of the Day.

Birthday girl Enid was one of the six female voices this week. Accompanied by Neil on guitar, she sang Daydream Believer and Show me the Way.

The Finale spot fell to Gareth Evans and my youngest son, Jordan.  They last appeared at the club twelve months ago (almost to the day) ago in what was Jordan’s debut public performance.

Since he moved to live in Derbyshire they don’t get to perform that often any more but maintain a healthy YouTube presence under the name of Northern Wood.

Gareth lives at Denbigh Green and we were lucky to have had him as one of the tutors on our recent Guitar Workshop. You can follow his excellent tutorials on YouTube and via his website.

Tonight they did a belting set of covers: Heartbeats by Jose Gonzalez, First Day of My Life by Bright Eyes, Bones by Josh Record and my personal favourite, the poignant Passenger song Riding to New York.

It was a fitting end to yet another fabulous evening of music at the club which also saw two or three new faces in the audience amongst the thirty-one of us assembled in the function room at The Feathers.

See you next week folks!
Chris