One of the first things our guest host for the evening did was inform us that it was National Limerick Day.

Well okay Peter, challenge accepted…
[one_half last=”no” class=”” id=””]
There was a young man called Pete Leslie
Who volunteered to be M.C.
But he chose the wrong day
’cause twenty-two turned up to play
Songs from Dylan to Beatles to Presley 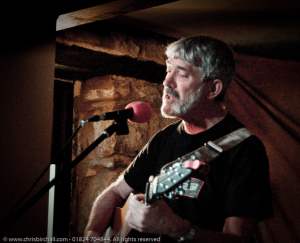 The second thing Peter did was get the evening’s musical program off to a cracking start with “Oh! Susanna” – but with a guitar on his knee rather than a banjo. Then he followed up with one of his own fine compositions “Just Dreaming”. 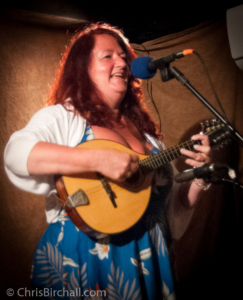 By the time we were half an hour in, the enormity of Peter’s task became apparent, for in addition to a good number of regulars, three new faces signed in to play, plus several we’d not seen in a long while, some making their first appearance since our move to The Feathers. This is one of the great features of Ruthin AllStyles – you never know from week to week who will turn up, or indeed how many, which always makes for a fantastically varied and entertaining night.

The three new faces this week belonged to Alison, Mark and Thomas, who hail from The Wirral and go by the name of ‘The Final Nails’. 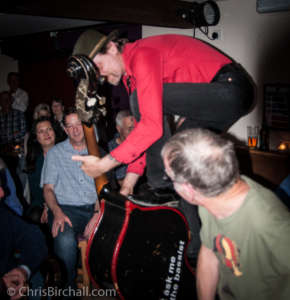 And Wow! What a great high energy set it was! The opening number was “Sitting On Top Of The World” and as the other two band members belted it out from the stage area, their German bassist, Thomas, ended up standing on top of his double bass halfway down the room much to the delight of everyone in the audience.

And this well-worn upright slap bass, I am told, has an interesting history, having once belonged to none other than Bill Haley and was used by The Comets on their 1952 recording of “Rock Around The Clock”.

With mandolin player Alison and guitarist Mark sharing the vocals, they then gave us Imelda May’s “Wild About My Lovin”. Their two song set ended with shouts of ‘more’  from the audience, but with so many to fit in we had to press on.

There were four performers who whilst they have been to the club a time or two in the past, we would love to see more of them:

One such was Robin from Melin-y-Wig who gave us a lively and animated version of Neil Young’s “Southern Man”. Then Brian with “Keep On Walking On” and “Rag Mama”.

Ric Cheyney, who now lives down Harlech way, chose Ruthin AllStyles for something of a ‘come-back’ appearance announcing it was his first time performing in public for over five years.

Well you would never have known it, as he performed “The Elysian Fields” like a pro and followed it up with his own song, “Leeswood Blues” which he admitted was neither a blues number nor anything to do with Leeswood!

Our regulars, as always, produced a super mix of folk, blues, country and R&B, and to list all the songs here would result in writers’ (or should that be typers) cramp.

One of our regulars who is mostly seen wielding a six string fretless bass, this week brought along his acoustic guitar too, having given in to several requests over recent weeks.

“So tonight, Matthew, John Bass is going to be… John Rowell” And those requests were fully satisfied as he sang “Syracuse The Elephant” by Stackridge and Lindisfarne’s “Lady Eleanor”.

Tradition has it that a guest host performs right at the beginning, then opens the second half and does a final song at the end of the evening.

With twenty-two performers a second round was never going to happen, so we had to make do with just the extra song at the end. But we’re not going to let Peter off the hook – we’ll make sure he does an extra couple of numbers one evening in the next week or two.

For his finale, Peter chose one of his own songs “Relentless Rain” which admirably showcased his talents as both guitarist and wordsmith.

And although the clock was ticking well past our usual bedtime, the final word went to ‘The Final Nails’ as they came back on stage for an encore. They belted out Hank Williams’s upbeat “I’m Going Home”, and then we all did just that, taking with us, memories of yet another fabulous evening of live music.

See you all next week folks!