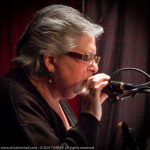 Lynda Degney was in charge this week and she had a full classroom to keep in order.

Hosting the evening, she kicked off the proceedings with a set accompanied by her husband Tom, before introducing no fewer than thirteen other performers to a full-house.

It’s always good to see new faces in the audience and even better when some of them get up to do a floor spot. One such was Dave O’Tool. Dave hails from Pembroke and was up this way visiting family in Denbigh.

He sang an interesting set of his own compositions which included a song with a “dirty old town” sort of theme which was rather critical about an unnamed town. Dave explained that if anyone had by chance seen him at the clubs in Pembroke, they would have heard him announce that it was written about Denbigh, but then confessed it was really written about Pembroke!

Our audience were highly amused by the anecdote – if not entirely convinced! 🙂

Someone who was a newcomer a couple of months ago is Tim, who moved to Ruthin from Pembroke’s neighbouring county Carmarthenshire. He has since become a regular, entertaining us with a diverse mix of folk, both traditional and contemporary. For his second spot of the evening he abandoned his folk guitar in favour of a set of English bagpipes. Or perhaps they were Northumbrian or Welsh but certainly not the multi horned tartan Scottish variety.

He flawlessly delivered the jaunty medieval sounding tune to a foot tapping hand clapping audience who followed up with a rapturous roar of approval.

I do love the musical surprises that a Singer’s Night can randomly throw up!

We are so lucky to have so many regular musicians who provide a wide range of songs and styles. Tonight’s roll call also included locals Stephen, Joe, Phil, Chris, Neil, Harry and John Bass; and from further field Geoff, Glyn, Penni and Enid.  Not forgetting, of course, two stalwarts Tom and Lynda who travel to us almost every week from Rhos-on-Sea.

As hosts for the evening, Lynda and Tom did an extra spot as a finale to round off a fabulous evening’s entertainment.

More of the same at The Feathers next week – see you there!