Nobody’s Knocking at the Door

Okay, so nobody was knocking at the door but do me a favour, open the browser and let ’em in ♫♪

And let ’em in we did. During Thursday evening, there were up to 107 people watching the live stream at any given time and as of today, it had logged up 627 views. I think it’s fair to say, the virtual Cavern was virtually packed to its vaulted ceiling.

We had hinted that the theme might be The Beatles, at least, in terms of the setting and the tee-shirts we’d be wearing, without thinking everybody might assume they had to do a Beatles number.

It could have gone badly wrong with everybody sending in the same few songs. In the event, that didn’t happen and we had a nice rounded selection of songs from the Fab Four in amongst a goodly number of non-Beatles offerings.

Thirty-nine songs in all, sandwiched between an opening song about music festivals by the inimitable Anthony John Clarke at 8.10 pm and the wonderful Tennessee Waltz in the finale spot at just after 11.00 pm, when Jimmy and Sarah Lou premiered their brand new song “One Cowboy Cowgirl”.

Every song was a gem in its own right. There were some great covers and some fabulous originals. 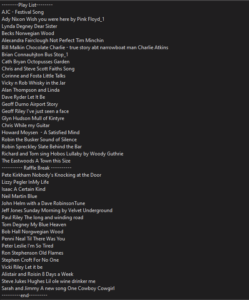 There was lots of fun too, including another “hidden camera” episode in the AllStyles ‘reality show’, Lockdown with the Eastwoods. Poor Richard; just seven days after facing the prospect of being buried alive, wrapped up in a carpet, this week he was tied to a chair being interrogated for stealing the last toilet roll!

One of my personal favourites on the night was Pete Kirkham’s brilliant re-write of Paul McCartney’s “Someone’s Knocking at the Door”, which gave a name-check to practically every member and contributor to our wonderful music club.

Thank you all for being so supportive and enthusiastic. It’s really important to keep our musical community going during these troubled times.

Watch again
Wind on the 8:5 minutes for the start.

Wind forward to about 8.5 minutes for the start