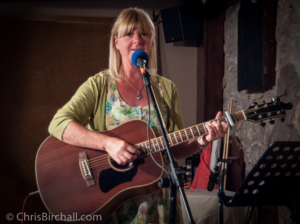 Yes, they invaded from the north – but there was nothing uncivilised about it.

We have a fairly regular contingent, of course, who descend on us from the northern shores. They were represented this week by Tom and Lynda from Rhos-on-Sea, Richard Davies from Rhyl and, from Abergele’s coastal climes, Wendy and Richard Eastwood. 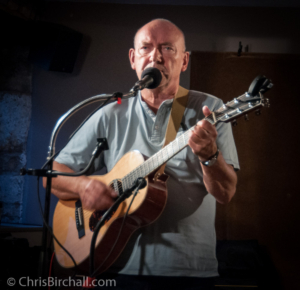 Joining them were no fewer than four new faces: Conwy Folk Club’s John Blower (right), Tony Grant from Sunny Rhyl, and the duo known as Hope from the same neck of the woods.

And we are just talking here about the front line performers. With them, of course, came a goodly number of support troops in the shape of audience members who’d come along to enjoy the music. 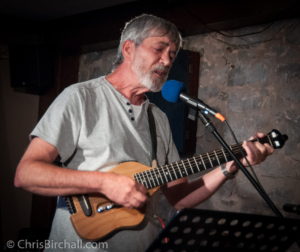 The first battle cry came from Lynda Degney, declaring she was “No Stranger to the Rain”. Accompanied by husband Tom, they also sang about “Blue Grass Music”, before Tom switched both instrument and genre to accompany Richard for a bluesy set that included a new song (from him), Tom Russell’s “St Olaf’s Gate”. Tom also did a solo spot featuring “Little Jimmy Brown”.

Peter Stevens’ set included a John Denver (of course) and a Tim O’Brien, and in the second half he recruited the other Peter, Wendy, Tom and Lynda to join him on “The Midnight Special”. 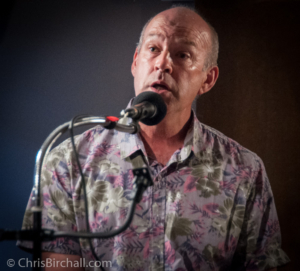 Chris’ songs this week came from Damian Rice and Neil Young, and Joe Lyon covered songs by The Beatles and The Searchers. Joe also entertained with a couple of jokes that he reckoned were “less corny than Chris’s”.  Hmm… the jury is out on that one! 😉 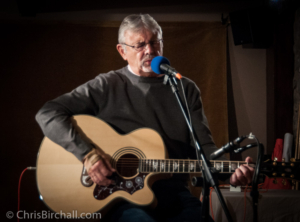 Then it was the turn of the ‘new faces’.

Tony Grant (left) sang “The Minstrel” by The Houghton Weavers and the 1977 Dan Hill ballad “Sometimes When we Touch”. 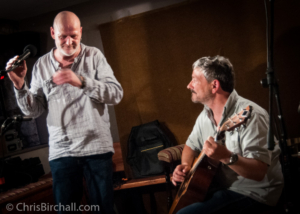 The finale spot this week fell to the Rhyl duo, Hope. Nathan and Steve (right) are prolific songwriters and in the first half had performed “Temptation” and “Take it Slow”.

To finish off another excellent evening of music, they performed their song entitled “Go”.  But we couldn’t let them go – at least without an encore in the shape of “Madeleine” which, like their other songs, was met with a warm and enthusiastic reaction from our audience.