Eee, it were a damp night – and that’s putting it mildly. It was a night were only the hardy, the fool-hardy and those who owned umbrellas would dream of venturing out.

We expected a quiet night, and it certainly started that way, but in the end the musicians numbered a baker’s dozen with almost the same number of audience.

I was in a Bob Dylan mood and started the evening off determined to be “Forever Young”, and reminisced about the “Girl from the North Country”

Joe Lyon sent us a “Postcard from London”, Ray Davies style. The Degneys were in Hillbilly mode, with Lynda singing “Bluegrass Music” and Tom covering The Bluegrass Brother’s “Heaven”.

Next up was Richard Davies, spilling the beans about what “Silvia’s Mother” had said, followed by a set from Geoff Hollis that included the Bryn Phillips song “Silver and Gold”.

Joan Baez was very much in Bob Hall’s thoughts as he sang “There but for Fortune”.

Birthday-girl Glyn Hudson insisted that “Hard Times Come Again No More”, and then had us all joining in on the naughty bits in her comedy ditty about that pesky fly…

Displaying some nifty guitar work, Penni Neale gave three new songs an airing tonight, including the Emmylou Harris number, “You’ll Never Be The Sun”. Then Jeff Jones reminded us there had not been much sun today, with Jimmy Van Hooson’s “Here’s that Rainy Day”.

For the third number in her set, Sweeney put her guitar to one side to deliver a belting a-cappella version of Declan O’Rourke’s “Marrying the Sea”.

And to bring another great evening of music to a close, Enid Toft sang “The Rose”, followed by “Don’t Cry for Me Argentina”, both to the impeccable guitar accompaniment of Neil Wilkinson.

And of course, we’ll do it all again next Thursday folks and folkies – whatever the weather! 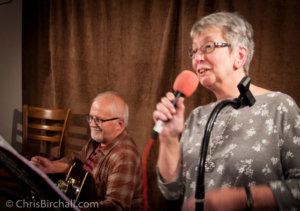 Twelve on the Twelfth Banding Together