Bob Neale opened the evening for us with the John Prine song “Long Monday”, roping in Penni as his backing singer, and then followed up, Donovan style, with Buffy Sainte-Marie’s “Universal Soldier”.

Then things went all Irish with Robin wishing he was “Back Home in Derry”, and Glyn wanting to “Repair to the Curragh of Kildare”, before Joe Lyon brought us back to Liverpool’s “Strawberry Fields”.

Cath Bryan sang “Hey Little Sister”, Lynda Degney was “Crying in the Rain” and Penni Neale made us go all “Misty” with “Autumn Leaves”.

Speaking for us all I guess, John Ryder waxed lyrical with Jake Owen’s “We All Want What We Ain’t Got” and Ros echoed the sentiment with “Isn’t It a Pity” (George Harrison).

The second Beatles song of the night was “Penny Lane”, performed by Gary Jones which he followed up with Randy Newman’s  “Short People”.

“Sometimes She Forgets” by Steve Earle was Richard’s first choice, his second being a great cover of “Lola” by The Kinks.

It was good to see Raphael Callaghan back and he treated us to three songs off his debut solo album ‘Said and Done’, which when all said and done, were quite tasty.

They were: “Too Much Rain”, “Homemade Blues” and “Kokomo Blues” (see below for more info) 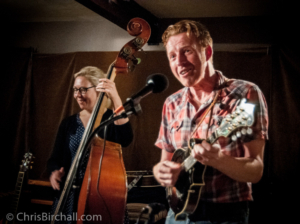 Tom Degney sang “Ages and Ages Ago” before introducing the evening’s finale act. Tom had known Russell Williams since he was knee high to a grasshopper and after a chance meeting at a recent festival, persuaded him to visit our club.

Performing as a recently-formed and yet unnamed duo with bassist Helen Lank, Russell treated us to some highly entertaining lively Americana with “Slippin’ and Sliding” and “Yes Suh”.

Then for the encore they invited Raphael up to join them on harmonica for a nice bluesy number, Little Walter’s “My Babe”.

Raphael’s debut solo album “Said and Done” comes with a 20 page booklet with the back-story to his songs. It costs just £10 from Probe Records in Liverpool or mail order from his website.