There was a ‘full house’ in the function room at The Feathers Inn, when the former frontman of ELO2, Phil Bates, performed a concert for us at Ruthin AllStyles Music Club. 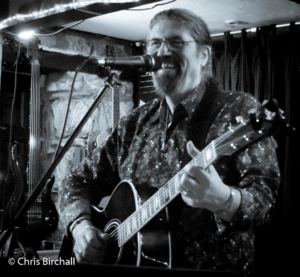 The popular singer, who now lives in Germany, has been to our lovely little club every two or three years since way back in its days at The Castle Hotel and The White Horse when club founders Llinos and Campbell Finnie were at the helm.

I first saw Phil up at the Cross Keys back in 2013 and this is his second time here at The Feathers. On every occasion he is a big hit with the audience, performing a broad mix of covers and original material, with the occasional ELO classic thrown in too. 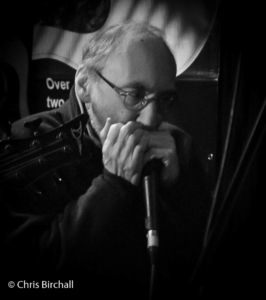 This week he opened with a bluesy set before progressing onto more rocky numbers and in the second half when he was joined by his wife Jo on electric piano and our own John Rowell on his fretless six-string bass, with Raphael Callaghan contributing harmonica accompaniment toward the end of the evening.

Phil entertained our capacity audience with a mixture of covers and his own compositions, some of which reflected his wry sense of humour in songs such as “If I’d Known I’d Live This Long I’d Have Taken More Care Of Myself”, and “I’m Going To Viagra”.

If I had to choose my personal favourites from the evening, it would be a toss-up between the Beatles cover, “My Love Don’t Give Me Presents” and Peter Green’s “Need Your Love So Bad”. (See the videos below) 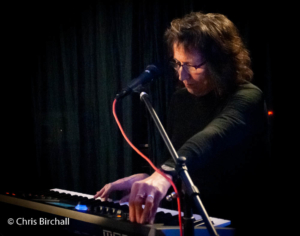 Floor Spots
As always, the evening began with a round of floor spots by a selection of our regulars who frequent the club’s highly popular Singers’ Nights which attracts musicians from all over the region. A song each from Chris Birchall, Joe Lyon, Lynda and Tom Degney, Richard Ruthin, Glyn Hudson, Raphael Callaghan and Steve Juckes-Hughes got things off to a fine start.

Our next concert is on the 30th of January when Wirral-based country duo, Tennessee Waltz make a welcome return and in May, our own Gary Edward Jones will be opening for the renowned Colorado singer-songwriter David Starr.

A playlist of videos from the concert courtesy of Jim Hoban, devotee of all things ELO
Click the menu button [≡] for the listings