Phil Bates Rocks a Full House at The Feathers 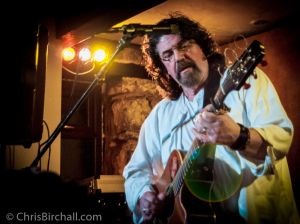 And what a full house it WAS!

No fewer than forty familiar faces turned out for our Guest Showcase Night, plus twenty ardent Phil Bates fans who’d travelled far and wide (from as far away as Carlisle and Northampton) to see this fantastic musician strut his stuff, up close and personal, in the relaxed and cosy atmosphere of our venue at The Feathers.

It has to be said: we could have sold all sixty tickets – several times over – to fans of the former ELO Part 2 front man. However, and we’ve said it before, Ruthin AllStyles is a singers club, run primarily for the members who turn up week after week to perform and entertain, and pay the princely sum of thirty bob a week for the privilege! 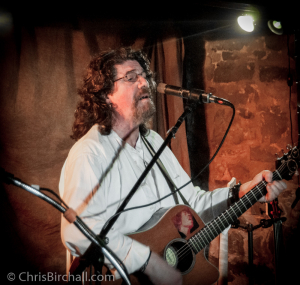 So when we are fortunate enough to be able to engage the services of such a popular professional musician, we make no bones about the fact we charge those fans a fiver to join us for an evening of diverse and varied entertainment featuring such a fine artist at the top of the bill, whilst members come in for their normal fee in acknowledgement of their regular contributions.

These special events are about making music, not money. In any case, I’m certain that all those visitors would agree that a night like this would have been cheap at thrice the price! 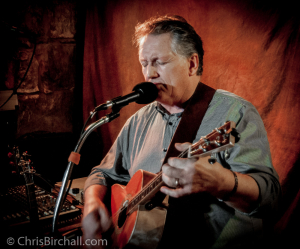 Of those regular members, several turned up armed, and readily became part of the communal support for our main act.

John Williams was tasked with opening the evening, having travelled over from The Wirral with his lovely partner Svet. It took him mere seconds to have the whole room entranced with the sound of his four string tenor guitar.

Then some hairy photographic bloke got up and warbled followed by everyone’s favourite busker, Robin Wynn Jones, who was joined by Tom Degney and on mandolin and John Rowell on bass, to form an impromptu band. 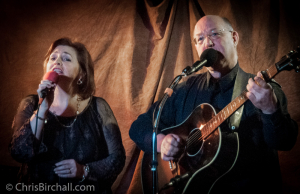 Next up were AllStyles stalwarts Joe Lyon and John Ryder, the latter being joined by wife Ros on backing vocals. As a treat for ELO fans, John did a cover of “When I Was A Boy” from the new album by Jeff Lynne. Then, from Sunny Rhyl, we had the harmonious Hesfords, Alan and Dawn , followed by Denbigh songbird Penni Neale.

Richard Davies took us on the “Sea of Heartbreak” with crew members John Rowell sporting a rather fetching headband, and Tom Degney who then remained on stage to accompany his wife Lynda.

Then we had “Hard Times Come Again No More ” sung by Glyn Hudson. Her a cappella version of this the American parlour song had the audience joining in from the off.  And it turned to be a good rehearsal for the final part of the evening when Phil Bates reprised that very song, to the accompaniment of his own slide guitar.

Glyn not only brought the first segment of the evening to a close, she had, that very day, also brought her working life to a close. And we were all delighted when she distributed cake to everyone during the break by way of celebration to mark her retirement. 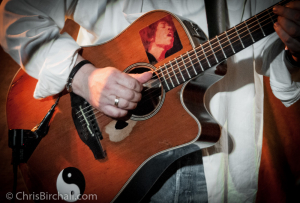 Cake eaten and glasses refreshed, the time had come for Phil Bates to take to the stage with his famous holey Takamine guitar for the first of two forty-five minute Showcase Spots.

He opened with a couple of songs from his first album Naked, “Love Affair with the Blues” and “Kind Hearted Woman”, before launching into the classic ELO number “Can’t Get It Out Of My Head”.

Then followed a string of songs that we all know and love including some Beatles classics, as well as his own compositions.

This was Phil’s forth, or maybe fifth visit to our club, and it has been something of a tradition that our own John Rowell gets up to join him on bass guitar for several numbers. They sound so good together, I swear they should organise a tour!

It’s hard to pick out favourites from such a fabulous set list, although because I have a crazy sense of humour, “If I’d Known I was Going to Live This Long, I’d Have Taken Better Care of Myself” has to be up there. Also “When the Shit Hits The Fan” which had the entire audience singing along with reckless abandon. Both of these are Phil’s own compositions – so I’m not the only one with a crazy sense of humour!

Since starting to write this post, I have come across a review of the show by Keith James Sinclair who runs the ELO Beatles Forever  website that endorses and recommends Phil Bates to those enlightened folks who enjoy the music of ELO & Jeff Lynne, Roy Wood, The Move, Wizzard, The Idle Race, ‘Brum Beat’, The Beatles and related artistes. So I’m including here (with Keith’s kind permission) part of the review, which you can read in full by clicking through to his website.

His spellbinding performance at the intimate and homely Ruthin All Styles Music Club in North Wales more than proved his pedigree as a top class guitarist with a twenty-two song set of premier Blues, original compositions and select covers – albeit with a little enjoyable support from his friends: the singers and players of the above institution.

We heard just the one ELO and two Beatles acoustic interpretations – a wonderful rendition of “Can’t Get It Out Of My Head” as well as “She’s A Woman” and “I Saw Her Standing There” but this concert was more about the music of Phil Bates and the music that sparks his musical fires.

Whether it was newer songs “You’ll Never Be Alone” and “Empty Rooms” or the older “One Sky” and “Life In the Slow Lane”, Phil’s own material slotted in perfectly with the smooth Blues of “I Need Your Love So Bad”, “Mississippi River Blues”, “The Sensitive Kind” and “Hard Times Come Again No More”.

The deep sorrow of the Blues was balanced by succinct observational irony of “Going Overboard” and “Waiting For the Sh*t To Hit The Fan” yet the highlight of the night for this writer was surprisingly not that wonderful ELO cover but a sublime version of Ray Davies’ “Waterloo Sunset” – as Phil said, one of the greatest songs to come out of the Sixties.

And finally, I’d like to thank my lovely wife Jayne for her help in organising the evening, Joe Lyon for helping set out the seating, the club members who remained behind to clear up after everyone had gone, and John and Cathy Rowell for providing hospitality and overnight accommodation to Phil Bates and his family.

And of course, thanks to all the club members for their continued support and for making this such a special evening. 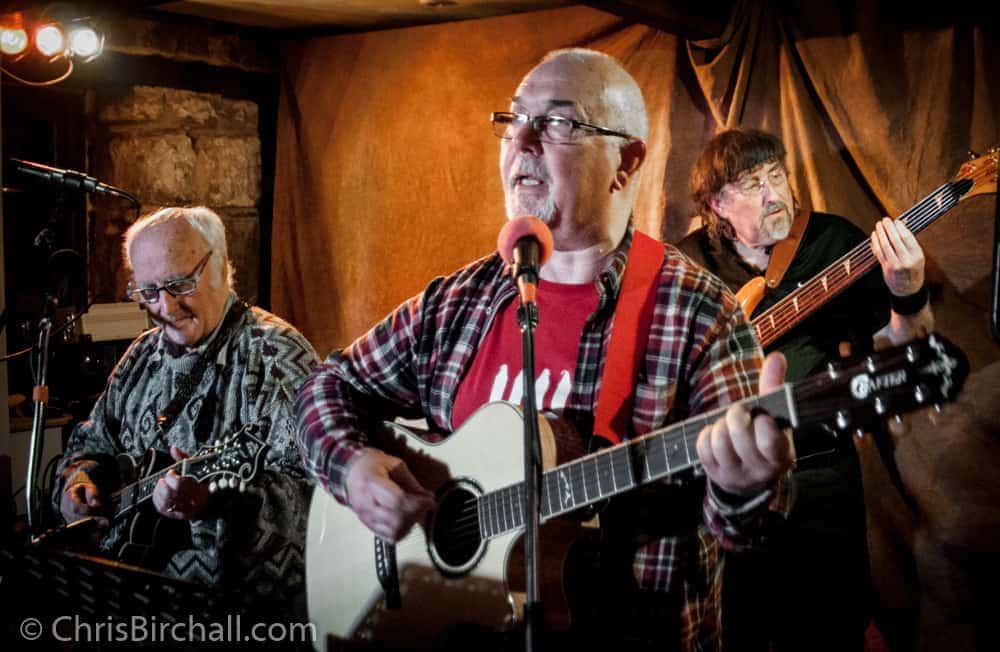