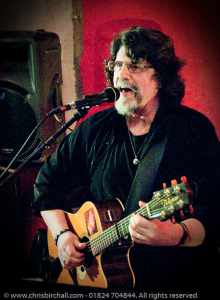 One of the songs sung at Ruthin Allstyles this week was “Doesn’t get any better than this” …and d’you know, it really doesn’t!
Phil Bates gave us an evening’s entertainment as good as you would get anywhere. He has, after all, performed in such prestigious venues as Carnegie Hall and was part of the second incarnation of the rock band ELO.
So what was he doing performing at the Cross Keys? Quite simply, he really likes the warm welcome he gets at Ruthin AllStars. This was the third time be has appeared as a guest – plus he even called in to do a spot on a regular “singers night” a couple of years ago whilst on holiday in North Wales with his family.
Sadly, this was his last gig in the UK before moving to Germany with his new band.
We were also delighted to see the return this week of Dawn and Alan, who opened the evening in fine style.