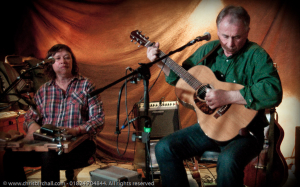 The stage was set with an impressive array of instruments which included a Henderson Acoustic Guitar, National & Dobro Resonator Bottleneck Guitars, Weissenborn Acoustic Lap Steel and a Ukulele.  There was also a quite unique “bass drum” in the form of a wooden case and foot pedal with which Ashley Dow kept a steady foot-tapping beat as he worked his way through the stringed instruments during Rag Mama Rag’s lively and varied repertoire. 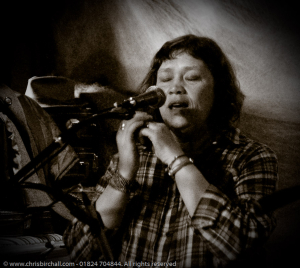 Yet it was to the left of the stage that Deborah Dow provided the main percussion with Washboard, Spoons and Tambourine as well as providing Backing Vocals and some superb Harmonica fills.

During the two sets we were treated to Americana music of the 1920’s and 1930’s with their mix of Country Mississippi Blues, East Coast Ragtime, White Country, together with a selection of contemporary covers and their own compositions. 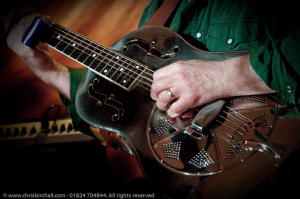 They did a great version of Skip James’ ‘Hard Time Killin’ Floor Blues’  and their real sing-a-long numbers such as ‘No Matter How She Done It’ ensured audience participation creating a great atmosphere.

Being slap bang in the middle of a 24 date UK tour, Ashley joked about the amount of super-glue he was having to use on his worn-down finger nails. The intricacy he displayed playing 1860’s instrumental, ‘Rally Round The Flag’, on the lap steel, you’d never have guessed. 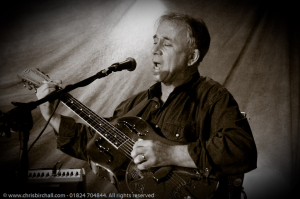 Ashley and Deborah moved from Essex to live in France some years ago and have since built a reputation as one of Europe’s finest country blues acts and regularly perform at major festivals in France, Belgium and Germany. It was great to have them back at Ruthin.

To open both halves of the show, we had songs from Richard, Tom & Lynda, Joe, Chris, Tim and from Jezz who plucked some sweet sounds from her lute to accompany her equally sweet voice.  All of which made for a wonderfully varied evening of live music.

If you missed it, you really missed out!

A packed-out singers night Packed out at The Feathers