Raphael and The Baker’s Dozen 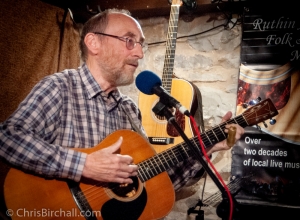 In case you’re thinking that’s a cool name for a band… well it would be if it was, but it isn’t.

Raphael Callaghan is, of course, the mighty fine country blues singer who gave us an extended mid-evening showcase tonight, and the ‘baker’s dozen’ refers to the thirteen musicians who performed floor spots before and after.

Originally from Liverpool and now living on the North Wales Coast, Raphael has his own unique style of acoustic blues, gospel and roots. His performance and style of songwriting are the fruits of years of experience playing solo and in various groups and bands. The most recent, and indeed current position, of course, is as the fifth member of our own Tom, Dick and Harry band.

Tonight though, the stage was his and his alone, as he delivered a cracking set of eight songs, opening with “Living Blues”, followed by “Silk For Skin”. Some where old favourites, some were tracks from his latest album “Said and Done”. 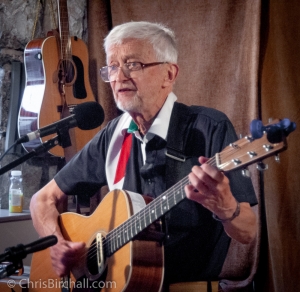 As completely inconsistent as it was with the current heat wave, it was nevertheless refreshing to hear “Too Much Rain”.

“This Old Denim” and “Don’t Let the Devil Drive” were amongst the others we heard, Raphael accompanying himself on guitar and harmonica. He threw an a cappella number into the mix and kept us entertained with just the right amount of banter in between songs.

The function room at The Feathers was comfortably full, with a few new faces in the audience too. As well as those who had come to watch our guest perform, there were four gentlemen who were staying overnight in the area whilst walking the length of Offa’s Dyke. Their itinerary had been scheduled to include a stopover at the International Eisteddfod and a visit our little club. We were delighted when one of their group, Bill Hackwell, asked to borrow a guitar and perform a floor spot for us, singing “Putting on the Ritz”, followed by Richard Thompson’s “Beeswing”. 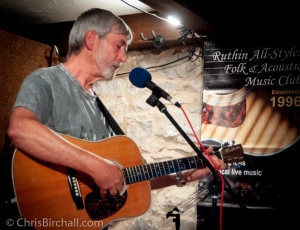 Another Rain Dance
It was also good to see the return of the globe-trotting Peter Leslie.

He too must be finding the heat a bit unbearable as he sang his own plea to the rain gods “Incessant Rain”.

We had a liberal sprinkling of country, folk and Americana from regulars Richard Davies, Tom and Lynda Degney. Some a cappella folk from Steve Bailey, some Scottish airs from Jim Cole, traditional Welsh folk from Rhodri Jones, and some memories of Merseyside from Joe Lyon.

The Eastwoods did what the Eastwoods do best: Don Williams from Richard and Patsy Cline from Wendy. And ‘Mr Blues’ himself, Brian Peters did us proud with his guitar, harp and stomp-box, singing “CC Rider” and “Sitting on Top of the World”. 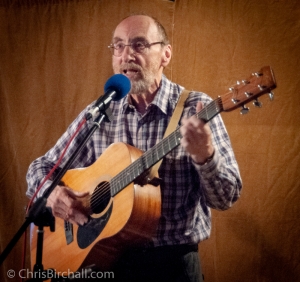 It had been a superb, full and varied evening of music, with two songs each for the floor-spotters and eleven from Raphael.

Then it was over to our guest for the finale. He sang “Mercury Blues” (K. C. Douglas ) and his own song, “A Time to Leave”.

But it wasn’t quite time to leave, because we persuaded Raphael to do one more as an encore, with everyone in the room joining in on “Breaking Up Is Hard To Do”. (Click ► to play)

Festival Week Frolics at The Feathers Wot… No Oranges!