Red, Green and the Blues 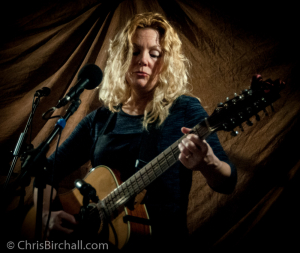 Whilst ardent Liverpool supporters in the main bar were cheering on the Redmen in the second leg of the Europa League tie, we were getting all Gaelic and tipping our hats to the Isle of Emerald Green in honour of the patron saint of Guinness.

The evening even featured Lynda Degney singing “A Walk in the Irish Rain”.

The music kicked off with Tom Dick and Harry (plus John Bass) singing a whole mess of the blues that included “Corrina Corrina”, “Wagon Wheel”, “Delia Gone” and “Going Down Slow”.

Being of Liverpool/Irish descent, Jez Kookli-Petrou (pictured above) sang out that “Black is the Colour” before saluting St Patrick with “The Galway Shawl”. Jez beautifully finger-picked her own accompaniment on a borrowed 12-string.

Next up was Joe Lyon who, being of Liverpool/Everton descent 🙂 hedged his bets by singing “Blue Songs on a Red Guitar”.

Joe also had a new song in his repertoire and gave a belting first airing to “Concrete and the Clay” which was a hit in 1965 for Hertfordshire band Unit 4+2. Then he got all sleepy with “Goodnight My Friend” and “See You in my Dreams”.

The rest of the evening was just as colourful. Tom Degney sang “Sadie Brown”; I sang “Sweet Child of Mine” and we had two lovely songs from Alex Fairclough: Bon Jovi’s “It’s My Life” and the Kieran Halpin number, “Nothing to Show”.

John Ryder sang the 1950s Hank Williams hit “Why Don’t You Love Me” and Ros sang “Why Do You Treat Me Like You Do”. They must have patched things up though because she followed it with “Baby Can I Hold You Tonight”.

So it was another great evening. Thirty-one in the room, eleven performers doing up to four songs each, and a nice finale of “The Letter” and “All of Me” from the Tom, Dick and Harry band.

Sound Note:
Even though there was a lot of football-fuelled banter going on in the main bar, our Acoustic Screen did a pretty good job of keeping all but the loudest cheers from filtering through. We can all help in this respect by making sure the screen is tightly closed over after visiting the bar or toilets.

Talking
We endeavour to keep the PA at a comfortable level to reinforce the performances rather than “blast it out”. So perhaps this is also a good time to also remind everybody that talking during songs is not only disrespectful to the singers but can spoil the enjoyment for others sitting near you.
We do realise that it is nice to sit chat with friends who have a common interest. But there is plenty of time for banter between songs, during the break or through in the bar. That way we all get the best of both worlds.

Lecture over. See you all next week folks 🙂