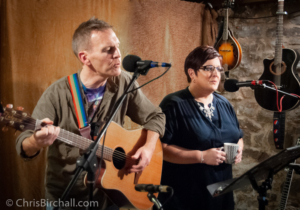 We have been enjoying Alan Thompson’s music here at the club for going on four months now. Since he and his sister Linda discovered Ruthin AllStyles, their floor spots have become one of the highlights of our Thursday evening gatherings.

So this week we had a special treat as the pair not only performed a showcase but also brought in John Evans, the third member of their former band Red Hill, to join them on a few of the numbers.

It was a balanced and well thought-out set, comprising covers (did someone mention Ryan Adams? 😉 ) and some of Alan’s beautiful self-penned songs, all graced with some absolutely beautiful harmonies. Their voices really do work well together and their relaxed style makes it look so natural and so easy.

It was the second time we have used the new ‘split showcase’ format which seems to be going down well.  Alan and Linda opened the evening with two songs, opened the second half with four, and then did a couple of numbers in the finale, allowing plenty of opportunity for floor spots (in this case from twelve other performers). The overall result was a varied and balanced musical program.

One of those floor singers was their friend and colleague John Evans and it was their turn to back him as he performed one of his own songs just before the finale.