…the fifth of November.  And it was indeed a night to remember – with music from eleven of our regulars plus a couple of new guys!

I lit the blue touch paper for what would turn out to be a cracker of an evening, with a bit of Tom Waits and Dylan. Two bars into the first song I realised I was up front minus my hat.  If I’d known Lord Degney was secretly filming I’d have declared a false start and got “properly dressed” 🙂

For the second floor spot of the evening he swapped said film camera for a mandolin as he took to the stage to accompany first Harry and then Richard for some bluesy country goodness with the likes of “Blues stay away from me” and “My old friend the blues”.

Tom then stayed up front to accompany Lynda for her set which included Richard Marx’s Hazzard, before returning to his secret filming. Joe was up next with “The night has a thousand eyes” – or 1001 as it turned out!

Ros went all BeeGees with “Run to me”. Robin sang about a donkey called Sally followed by Ralph McTell’s “Long way from Clare to here”. Then the sparkler that is Wendy lit up the skies with a song dedicated to her late father, “Only coming down in the rain”.

Wendy also whipped Tom, Dick and Harry back into action to accompany her on “Speed of the sound of loneliness” and then the boys were joined by Enid Toft on vocals for  “The First Cut is the Deepest” and the hauntingly beautiful Welsh song “Myfanwy”

The first of the night’s new faces, Graham Cooper, had insisted he would prefer to jam along with other people rather than do a spot himself. Not knowing what to expect of this rocker from Rochdale meant folks were at first non too keen on the idea. Luckily, Tim Eastwood succumbed to Graham’s request and agreed to an unrehearsed collaboration for the second song of his set. But first, Tim treated us to a song in Welsh that he had written, based loosely upon a reworked Donovan song. It was called Gwydyr Glas and it was tasty.

Tim’s second song was entitled – perhaps somewhat appropriately –  “Another Man’s Cause” by The Levelers. He began strumming his unplugged folk acoustic, glancing somewhat nervously at the rebel without a cause brandishing a gleaming white electric powerhouse alongside him.

The nervousness was short lived though, as Graham’s impromptu guitar licks blended seamlessly and sympathetically with Tim’s strumming. The resulting effect was impressive and was met with an enthusiastic response from the audience.

All of a sudden, Graham had no shortage of musicians willing to jam with him. In the second half  he accompanied John Ryder on an Elvis number, went “Knocking on Heaven’s Door” with Robin, and then Tim got back up with his border bagpipes to play a traditional welsh folk tune.

At this stage you could sense everybody wondering… Would Graham stay on stage to join him?  Would electric guitar even go with the sound of the pipes?
Well yes he did. And yes the resulting sound was brilliant!

Graham completed his Ruthin AllStyles début by singing Johnny Cash’s “Fulsome Prison Blues” with Tom sliding along on the dobro,

All in all these unrehearsed jam sessions made for a varied and highly entertaining evening – and all because Graham took a wrong turn in Mold.  He’d meant to have been heading for Wrexham and pulled into The Feathers car park to get his bearings, only to discover there was a music night in the offing and decided to stick around. Wrexham’s loss was definitely Ruthin’s gain!

But the night was far from over!

The second new face was a young man from Bath. Singer songwriter Chris Yeoh was in the middle of a little tour of North Wales’ music venues and had “heard good things” about our club.

In the first half of the evening he sang two original songs, “Many Excuses” and “Fire and Clay”, both lovely ballads accompanied by his own impeccable and relaxed guitar style.

And although the evening had already run way past our normal “bed time”, no one objected when we got Chris up to do a very late finale spot.  He sang another of his own songs “The Sea”, and for an encore sang a folk song about the disappearance of 4 year old Bobby Dunbar back in 1912.

It was a lovely end to one of those special evenings that nobody wanted to end.

Let’s do it all again next week folks!

☻ You can follow Chris Yeoh’s musical adventures on his web site The Man In Washington and on Twitter. 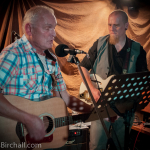 Halloween Ho Down Singing in the rain