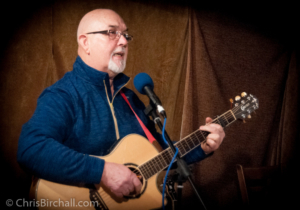 It was a foul night, but the lashing-down rain didn’t deter almost thirty music lovers from making their way down to Ruthin to shake off the remnants of ‘Blue Monday”.

The third Monday in January is thus named, having been officially recognised as the most depressing day of the year. So, we have countered this notion by declaring that the Thursday following shall henceforth be known as ‘Rhythm and Blues Thursday’.

And there was plenty of that going on in the warm and welcoming atmosphere of the function room at The Feathers, where thirteen of the gathered throng had thawed out sufficiently to entertain; not just with R&B, but with an eclectic mix encompassing all styles.

One such ray of sunshine was young Fuchsia Jones whose enchanting cover of the Bill Withers classic “Ain’t No Sunshine” warmed our hearts. (Click below to listen)

Robin the Busker had gotten the evening off to a flying start with a set that involved a collaboration with the omnipresent Tom Degney. 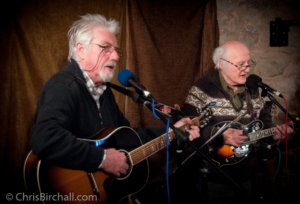 Tom was kept busy throughout the evening, as always. He treated us to a tune or two on his new banjo, which he swapped for a guitar to accompany his good lady Lynda. Later on, the mandolin was his weapon of choice, to back Richard Davies.

Blue was the theme running through Richard’s set which featured “Blue Moon of Kentucky” and “When My Blue Moon Turns to Gold Again”.

Glyn Hudson asked “Where Have All the Flowers Gone”; Joe Lyon had everyone singing along “In a Matter of Moments”; Andrew Bowsher took his hat off to Bob Dylan, and I took my lead from the Beatles songbook.

“The Gambler” is what Bob Neale became, singing the Kenny Rogers number of that name. 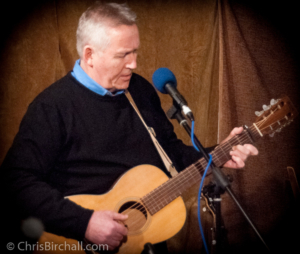 The long distance award this week went to Colin Campbell, who’d negotiated the rain-sodden roads from Llandudno to make his first visit of the year. His modified version of Alison Krauss’ “When You Say Nothing At All” put a smile on everyone’s face as they enthusiastically joined in on the slightly risque re-written chorus.

Mark Thatcher delivered a fine set, the highlight of which, for me, was his cover of “White Room” (below). 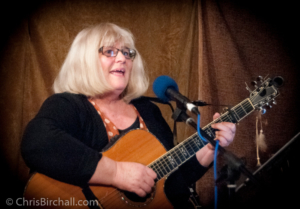 Finale time
And before we knew it, it was finale time once again, with Penni Neale ending what had been a other super evening, with “You’ll Never be the Sun” – a beautiful earworm to accompany us on our journeys home.

Next week, of course, we have an Intimate Concert with Gary Edward Jones. It is a sell-out, so there will be no tickets on the door, I’m afraid.