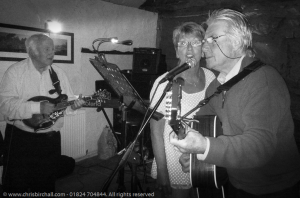 I suppose one advantage in the fact England have been ousted from the World Cup is that the footie fans have less of excuse to skip Music Club!  Last week’s meeting coincided with England’s last stand bringing our attendance down to single figures.

This week we bounced back, with a dozen taking to the floor and a similar number in the audience.

There were almost as many Suarez jokes as there were songs, inevitable I guess, given the Everton/Liverpool rivalry amongst the regulars.  Still it brought a bit of ‘bite’ to the proceedings   😉 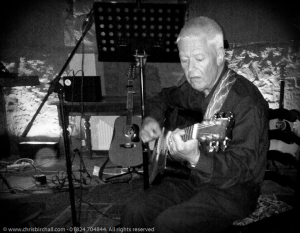 Phil Townson opened with some numbers off his album “One Man and One Guitar”, reminding us that the entire £7.50 from the sale of which will go to the North Wales Alzheimer’s Society.  Phil finished his second spot with a lovely instrumental, hitherto unnamed, that will now go under the title of Bill’s Tune in honour of he father who sadly passed away last week.

Next up were Caerwys Duo, Jill and Ian who’s set included a couple of Dusty Springfield numbers. Then it was that Birchall bloke with a Van Morrison and Dylan mix. We had Tom Petty from Richard and Michael Buble from John Ryder.  Joe gave a nodding acknowledgement to the weather with songs about the rain – as did Lynda.  Well… doesn’t she always.  And  what does it always do after Lynda sings about the rain…?  Yup! 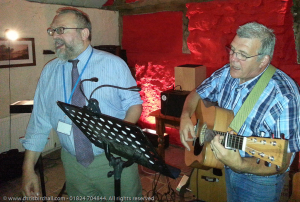 Enid took us across the “Sea of Heartache” backed by Richard and Tom.  Whilst Andy treated us to a couple of acapella folk songs, one with a traditional Irish flavour and another about Wessex from whence his sister-in-law had come for a visit to North Wales.

Andy Joined Stephen for  a fantastically animated finale of “Twist and Shout” and the hilarious “Mother’s Lament” written by Clapton, Bruce and Baker from Cream.

And so, as the “baby went down the plughole” (check out the song!) we all wound our merry way home. 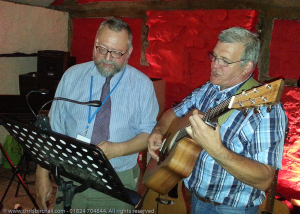