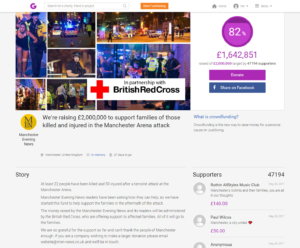 Four days into a week that had begun in the most horrible way imaginable, twenty of us congregated in The Feathers determined that the music would go on.

We had already indicated that the £1.50 door money would be donated to the fund set up to support the families of those who were killed and injured during Monday’s awful attack at Manchester Arena. But the generosity of the musicians and audience shone through and the jar at the door began to fill up. Not only that, there were donations from members who were unable to attend that evening and from members of the bar staff and friends who popped in specifically to pop some dosh into the collection.

Listen to “Fate” by Peter Leslie 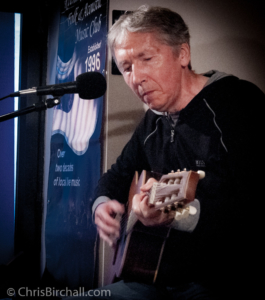 The Music
I got the music underway with a bit of Dylan. Then Lynda and Tom Degney provided some Bluegrass Music. Joe Lyon gave us John Lennon, and Ron Stevenson tossed in some Five Penny Piece.

Local musician Jeff Jones has popped in on our music nights from time to time, promising one day to bring his guitar and do more than listen. Tonight he kept that promise and treated us to some Latin Jaz in the form of “The Gentle Rain” by Luiz Bonfa, followed by Gershwin’s “Summertime”. 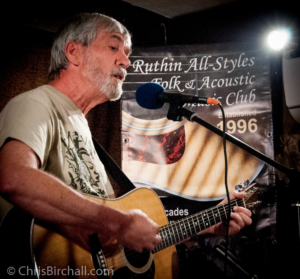 Peter Leslie opened his set with a lovely version of James Taylor’s “Something in the Way She Moves”. Then he sang one of his own songs, “Fate”, a beautiful poignant number which he dedicated to the Manchester Arena victims.

Richard Davies sang Bob Dylan’s “Don’t Think Twice” and then added a bit of Buddy Holly into the mix.

Harri Owen belted out “Lost in the Rock ‘n Roll”, taking us up to the break, during which we were entertained by some cracking comic yarns from guitar maker and luthier Harry Miller.

David Rees had opened the first of his two cracking sets with the David McWilliams song “The Days of Pearly Spencer”. For the finale, he gave us a Garth Brookes and a couple of his own songs, including the lovely ballad “Love in your Eyes” 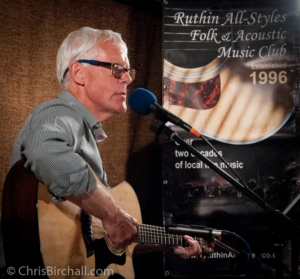