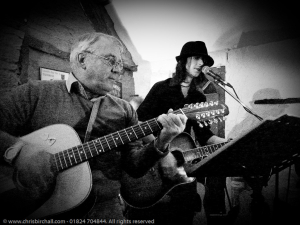 Another great night at the club.  Linda was roped in as the MC and she and Tom kick off the evening in style with a couple of old favourites and then Tom took to the stage with a solo instrumental on guitar that he had written entitled “A Waltz for Linda”

Songs followed from John and Ros, Joe Lyon, Richard, Chris, Hertfordshire Andy and Llanfynydd Alan.  The irascible William Walker and his son James played homage to Pink Floyd.  They perform under the banner of “Father & Son”.  Linda introduced Williams as Bill-I-am which translates into his mother-tongue as Och-Aye-the Noo-I-am!   😆 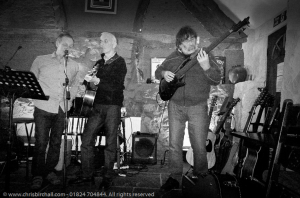 Raven  treated us to four numbers performed with their usual polish and ended the evening with Little Red Rooster complete with an impromptu shadow puppet show of said bird from Mick.