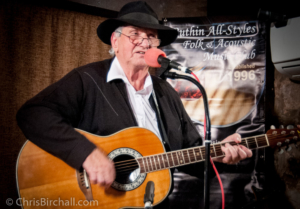 Just a short write-up this week, due to the fact Jayne and I took ourselves off to the Yorkshire Dales for a short break.

Not that you can get far away from Ruthin AllStyles. We were just getting back to the car after sampling the cheesy delights of the Wensleydale Creamery, and who walks up but Neil Wilkinson. It wasn’t just a case of “All The Car Parks In All The World…” but we discovered that he and Mary had been staying in the very same village of Ingleton as us the night before.

Sweet Sixteen
It was a lively and varied evening which was kicked-off by the Tom, Dick and Harry Band – plus John Bass, of course. 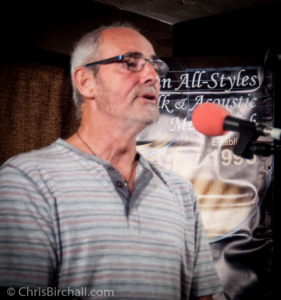 Sixteen of us in all, playing to a room of twenty four. There were the usual suspects, plus a couple of faces returning after a short absence. Notably, Jim Cole with his fiddle full of Scottish jigs, and Rhyl’s Colin Masterson (above)  – on guitar rather than his usual ukulele.

Then there was a new face – at least at the business end of the microphones. Bob Hall (right) has been a frequent visitor in recent months, quietly sitting at the back of the room, taking it all in. But we found out this week, he’d been hiding a damn good voice under his bushel.

First he gave a fine performance of the Joan Baez classic, “There but for Fortune”, with yours truly on guitar, followed by and equally fine a-cappella version of Ivor Emmanual’s “My Little Welsh Home”.

Move That Thing by Ron McSweeney 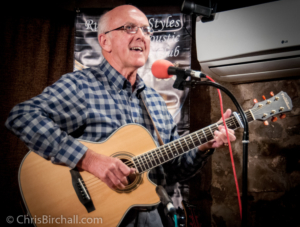 The long distance award this week went to Harry’s friend Ron McSweeney (left) who was making his annual pilgrimage from Nottingham. Ron always makes a point of making an appearance at the club, and always delights us with his songs and lovely guitar style.

The finale spot was given over to Penni, who was joined at the end by Wendy and Richard for a delightful rendition of that lovely Welsh ballad “Calon Lân”, sung a-cappella and with the most beautiful harmonies. (Click below) 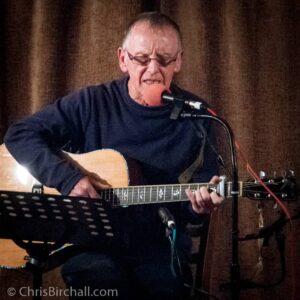