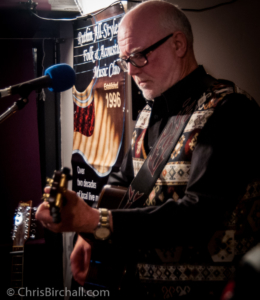 They came from near and far. From Ruthin to Rhos-on-Sea, from Wrexham to Reading. Oh yes… and from Spain too!

Penni Neale got things underway, leading us up the “Stairway to Heaven”, and Jim Cole led us back down again in a jiggy fashion, dancing to the tune of his fiddle.

We had some Americana from Richard Davies, Lynda assured us she was “No Stranger to the Rain” and Tom Degney sang about “The Newsboy Jimmy Brown”.

Glyn Hudson had the whole room singing along with her in a little comic ditty “Shisht”, and Ray Davies fan, Joe Lyon, brought us bang up to date with the former Kinks’ front man’s recent release, “Americana”. 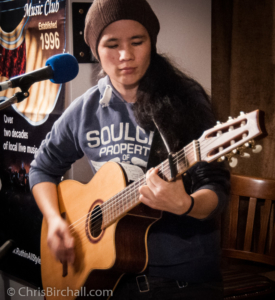 In the the words of The Eagles, Chris advised us to “Take it Easy”, whilst Richard Eastwood had the “Folsom Prison Blues”

In addition to a couple of his own songs, one being his latest, about a potter’s wheel, Peter Leslie paid homage to James Taylor with a fabulous cover of “Fire and Rain”

Next up was Sweeney, with a voice reminiscent of Joan Baez. She was joined for one of her songs by her friend Anna, who is visiting from Spain. I apologised for our weather, but Anna said she was enjoying it! How cool is that! (if you get my meaning 🙂 Together they performed a cover of Damien Rice’s “Nine Crimes”. You can listen to the soundbite below.

Mike Bostock hails from Reading and visits the club whenever he and his good lady are in North Wales on a walking/rambling holiday. By a strange coincidence, we also had a new audience member turn up this week who had just moved from Reading to live in the town. ‘Of all the gin joints in all the towns in all the world…” and all that 🙂 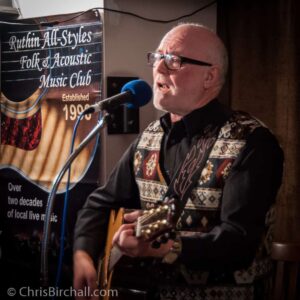 Mike’s first song was a cover of “The Hangman and the Papist” by Dave Cousins of The Strawbs. He followed this with a Show of Hands number “The Galway Farmer”.

It fell to Mike to take us up to the end of the evening. And he did so in grand style with a lovely version of Annie Lennox’s “Into The West”. And then for an encore, one of his own songs inspired by a true story that he’d researched after stumbling across an inscription on a gravestone in Eastbourne.