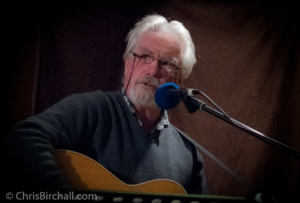 Richard Ruthin got the evening underway with the 1928 Bo Carter song “Corrina Corrina” accompanied by Tom Degney on mandolin.

Tom then swapped his mandolin for a banjo to treat us to a song he wrote in the dentist’s waiting room, and it’s true to say no-one was looking down in the mouth as he sang “That Old Willow Tree”. But we didn’t let him rest upon his laurels as his musical journey continued with “Wheels”, playing guitar this time with Lynda providing the vocals.

After putting all those different musical instruments through their paces, Tom sat down for a well-earned rest, and it was time for something completely different in the form of an a cappella interlude with ‘Mama G and the Be-bop Brunettes’. Demonstrating some beautiful close harmonies, Angharad, Lyn and Laura  eliminated any negativity with “Accentuate The Positive”.

Joe Lyon drew upon the back catalogues of Cliff Richard and Billy Joel, with “The Next Time” and “Piano Man”. 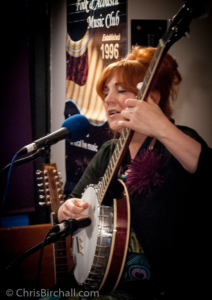 Next we were treated to a Richard Thompson song as Peter Leslie took us “From Galway to Graceland”.

By this time, I reckoned Tom had had enough of a rest, so I dragged him and his mandolin back up on stage to accompany me on Steve Earle’s “Galway Girl”.

Christy Moore’s “Black is the Colour” was the opening song of a fabulous set by Elfin Bow (Elizabeth Anne Jones).

It also fell to Elizabeth to do this week’s finale slot. You could have heard a pin drop in the room as she delivered a stunningly beautiful cover of Sandy Denny’s “Who Knows Where The Time Goes”,  before sending us home with a lively earworm in the form of her own composition, “Prairie Madness” off her debut album, which incidentally, has its official launch in Wales next Month at Theatr Clwyd.