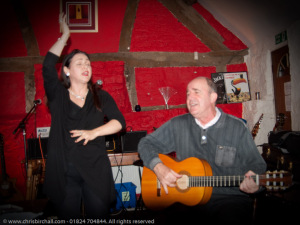 All Hallow’s Eve came early to the Cross Keys for as we approached the witching hour on Thursday, a certain Mr Skinner flew in with his own personal witch in tow.

Leeds based duo Steve Skinner and Sandra Twitchet, who go by the name of Skinner & T’Witch. were the perfect addition to our meeting the night before halloween. Sandra’s rich voice harmonizes beautifully with Steve’s low bass tones and guitar accompaniment, and her theatrical performance added to the overall enjoyment of their set.

The pair made Ruthin the first stop on their ten day holiday in Wales so that they could look in on our club, before flying over to the west coast – whether by car or by broomstick, I’m not sure.  I do know they intend making an appearance at Conwy Folk Club on Monday night though. 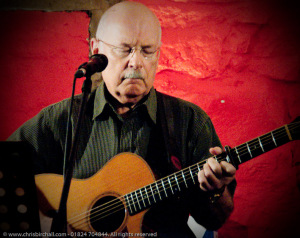 They sang three songs off their album Rise that was launched only last week.  The energetic Dance the Moment, God where are you?, and my own favourite Past Lives. They ended with two new songs Black Water and the haunting Zimbabwe.

Our resident ghosts and ghouls also put in some fine performances.  Joe, fresh back from a visit to his home turf, kicked off with a distinct Liverpool flavour by reliving his trip on the Ferry across the Mersey.  Enid kept the theme going with John Lennon’s Imagine accompanied by Neil on guitar.  Tom and Lynda were Waiting for the Times to Get Better ,  Harry told us about True Love Ways and Richard said Hello Mary Lou. 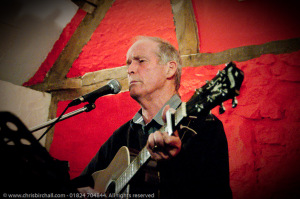 Rhyl Folk and Acoustic member Geoff Hollis is always a welcome visitor when he makes an appearance. One of his songs was Don’t let a Moment Pass You By and we did indeed get immersed in the moment.

All in all it was another great night at our great little club.  We each got four songs in and there was plenty of variety as usual.

Next week we have special guest Ken Nichols to look forward to.

See you all there.

Listen to Skinner and T’Witch playing Dance the Moment as a soundtrack to this amazing shadow puppet show video. Their album Rise can her downloaded or bought on cd from their Bandcamp page.

Dance The Moment V1 from Errol Murray on Vimeo.