Six of One, Half-Dozen of the Other

Yes, the performers totalled an even dozen, with an equal number of men and ladies and, with almost double that number in the room, it made for a terrific atmosphere.

It also meant that, unlike many of the busier nights we’ve been having recently, everybody had two spots each, providing an eclectic mix of three dozen songs, with Wendy’s encore in the finale ramping it up to thirty-seven.

And although it wasn’t planned, it turns out that everyone who performed, except Birchy himself, fell victim to the Hairy Photographer’s lens.

One of the highlights of the evening was when Richard announced that he and Tom were going to do “Baker Street” and apologised for the lack of a saxophone player.  Quick as a flash, Lynda jumps onto the stage to perform the saxophone solo on her kazoo. 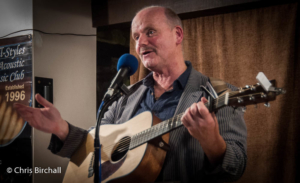 Regular members concessionary tickets can be purchased on any club night

They Came by Land, Sea and Air Last Song of the Summer